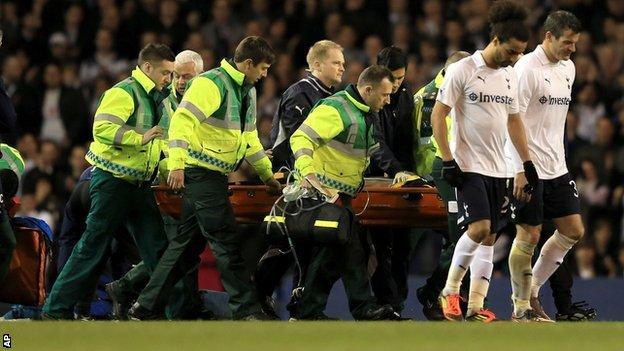 More than 900 defibrillators are being made available to clubs in non-league football and the Women's Super League.

The FA and British Heart Foundation have joined up to launch the £1.2m fund, one year after Fabrice Muamba's on-pitch cardiac arrest.

Muamba, 24, collapsed playing for Bolton during their FA Cup quarter-final with Tottenham on 17 March 2012.

The England Under-21 international midfielder was "in effect dead" for 78 minutes but survived the incident.

How important is a defibrillator?

Expert medical care on the pitch saved his life and he retired from football five months later on medical advice.

On the anniversary of his collapse, Muamba, who is set to become a father for the second time in June, tweeted: "Last year today my world nearly ended. I'm alive and loving life. Thank you all for love and support. God bless you all."

The defibrillators, which give the heart a controlled electrical shock during cardiac arrest, will be made available to non-league and grassroots football clubs, from the Blue Square Bet Premier to the county leagues at level six of non-league football, along with the WSL, the top tier of the women's game.

The FA will provide £400,000, with the British Heart Foundation matching the donation and the remainder coming from club contributions.

England Under-21 manager Stuart Pearce said: "The investment of £800,000 from The FA and BHF makes it much easier for clubs to get their hands on a piece of kit that ordinarily would be too expensive for them.

"It's important that football clubs take the opportunity to make sure we see more stories of survival in the future."

The initiative will also give players, staff and fans information needed to save a life, including advice on hands-only resuscitation techniques, which have been advertised for the heart charity by former Wimbledon captain Vinnie Jones.