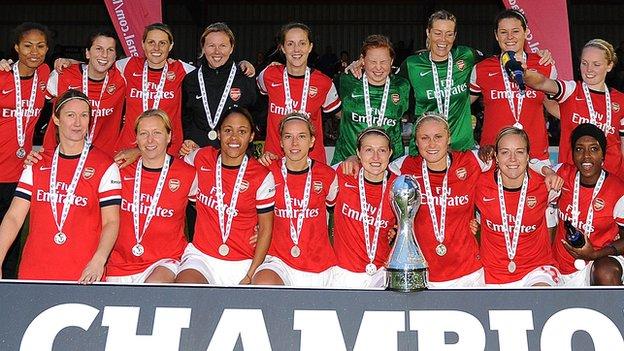 The new FA Women's Super League season begins this weekend and it promises to be the most hotly-contested campaign since its inception in 2011.

A year before the league expands to two tiers, the eight teams have been furiously signing new players, with five new managers also aiming to make an impression.

Two-time Women's Super League (WSL) winners Arsenal will again be the team to catch, but they face stiff competition as other clubs seek to make a breakthrough.

BBC Sport presents all you need to know about the eight teams as the season begins, and former England and Arsenal captain Faye White gives her thoughts on the chances for each side.

Digital Ambassador (selected by each club to be their 'digital face'):England defender Steph Houghton.

Players to look out for: England striker Kelly Smith, regarded by many as one of the world's best players, is still the marquee name. But as she reaches the twilight of her career, Scottish midfielder Kim Little is taking over as Arsenal's lynchpin. Little, who was one of two Scots in the Great Britain Olympic team, was the Super League's top scorer last season, while England midfielder Jordan Nobbs has been tipped as rising star after impressing on her debut in the Cyprus Cup.

Players in: None Players out: Kirsty Linnett to Birmingham.

Faye White's verdict: Club allegiances aside, I still think Arsenal start as favourites for the league, but it will be interesting to watch as they normally add new players to the squad and midfielder Katie Chapman is pregnant again so will miss the first half of the season. Arsenal have a strong and experienced team, and I would expect Jordan Nobbs to feature more regularly. There will be pressure on Shelley Kerr, but she is well prepared and the Scottish players at the club talk highly of her.

Players to look out for: Birmingham have pushed Arsenal close over the last two seasons, with England forwards Karen Carney and Rachel Williams backed up by England defenders Laura Bassett and Rachel Unitt. Williams was the Super League's top scorer in 2011, but losing forward Eniola Aluko to Chelsea will limit their options in attack.

Faye White's verdict: Birmingham's striking power was very good last season, but losing Eniola Aluko and Jodie Taylor is quite a big loss. I still think they will be strong and one of the biggest threats to Arsenal.

Players to look out for: Spanish forward Natalia has been billed by Mark Sampson as "the female Michu". She, like the Swansea striker, has arrived from Rayo Vallecano. The forward scored 300 goals in 12 seasons at the Spanish club. She will soften the blow of losing WSL players' player of the season Jess Fishlock to US team Seattle Reign, and will team up with fellow Spaniard Laura Del Rio, who was Bristol's top scorer last season.

Players in: Natalia from Rayo Vallecano, Gwennan Harries from Everton and Lucy Staniforth from Lincoln. Players out: Jess Fishlock to Seattle Reign and Melissa Lawley to Birmingham.

Faye White's verdict: Mark Sampson has got Bristol playing some good football, but it looked like they relied on Laura Del Rio a lot for their goals last season. They have a good core of players, but having lost Jess Fishlock and players to Chelsea the previous season, it's just a shame they haven't been able to keep building the squad. They are a hard team to break down.

Players to look out for: England forward Eniola Aluko may be familiar to a domestic fan-base, but the signings of Swedish striker Sofia Jakobsson and Brazilian midfielder Ester (pictured) are major coups for the club as they look to build on their run to the FA Cup final last season. England defender/midfielder Dunia Susi will also hope to have another eye-catching season.

Faye White's verdict: I know Emma Hayes from her Arsenal days and she has good links in women's football in terms of bringing new players in and will aim to push the club on and maybe demand more support from the men's part of the club. Sofia Jakobsson is lightning quick and will be a threat, and if she and Eniola Aluko can gel, their forward line is certainly one that could help them improve their league position.

Manager: Former Doncaster Rovers player John Buckley, who has coached the Belles since 2003.

Players to look out for: Sue Smith has recovered from a bad knee injury and has apparently looked good in training, while a young Doncaster team will be guarded by England under-23 defenders Lyndsey Cunningham and Victoria William. Midfielders Kasia Lipka and Emma Thompson, with Smith, will aim to provide strikers Millie Bright and Jess Sigsworth with the ammunition to score.

Faye White's verdict: I think they might struggle again this season, as they don't seem to attract too many big players at the moment based on their previous finishes.

Manager: Former assistant manager Andy Spence, who took over from Mo Marley in the close season.

Players to look out for: England striker Toni Duggan recently won the England under-23 player of the year award and is beginning to make her mark on the senior team with goals in the senior team's Cyprus Cup victory. Midfielder Jill Scott will provide the side's energy, while left-back Alex Greenwood is another promising English youngster.

Faye White's verdict: Liverpool might overtake Everton as they team to beat on Merseyside and the contests between them will be closer, with Everton previously holding the upper hand. Their case might not be helped by losing players like Fara Williams and Natasha Dowie, as they don't have a big squad and Mo Marley was a key figure. That said, Toni Duggan is an exciting prospect and Jill Scott's role in the team will increase.

Players to look out for: The arrival of England goalkeeper Karen Bardsley means that, alongside central defenders Casey Stoney and Sophie Bradley, Lincoln can now boast three of the England's back five. Megan Harris and England Under-23 international Remi Allen will boss the midfield and will be boosted by the arrival of New Zealand international midfielder Hayley Bowden, while another England player, Jess Clarke, will aim to provide the goals.

Faye White's verdict: Karen Bardsley will really strengthen them at the back, and from my time at Arsenal, I know how beneficial it can be to play alongside the same players for club and country. Knowing Rick Passmoor from his Leeds days, he always seemed to make teams play well and will get them organised - it is always hard to go to Lincoln and play. Perhaps they don't have as much firepower up front as they would like.

Players to look out for: A whole new team will grace the red half of Liverpool this season, with key figures such as England international Fara Williams pulling the strings in midfield. She will be backed up by a strong centre-back pairing of England international Gemma Bonner and United States international Whitney Engen, who was named US league WPS defender of the year in 2011. Natasha Dowie, niece of former Southampton and West Ham striker Iain, will provide the threat in attack.

Faye White's verdict: Having finished bottom the past two seasons and with bidding for places in the 2014 Super League just passed, Liverpool needed a boost to their team. They have brought in a lot of new players, but I'm not sure they have enough experience to challenge for the league just yet. A mid-table place might be more realistic.