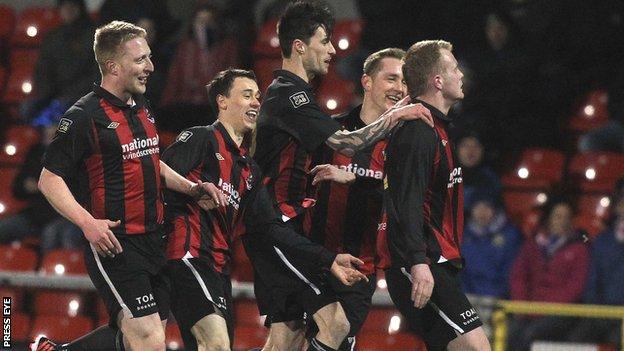 Crusaders kept their slim Premiership title hopes alive with a comfortable win over Linfield at Seaview.

Jordan Owens curled in a superb opener and Declan Caddell slotted in the second goal before Crues winger Paul Heatley smashed against the crossbar.

Owens rifled home after good work from Timmy Adamson on 55 minutes while a lacklustre Blues side came closest when Niall Quinn's free-kick hit a post.

The Crues are 14 points behind leaders Cliftonville with a game in hand.

Linfield made a bright start and Michael Carvill forced a good save from Yohann La Croix.

Ross Glendinng made an impressive save at the other end to keep out Paul Heatley, but he had no chance with the 24th minute opener.

Craig McClean's pass gave Owens the space to look up and bend the ball into the top corner from 20 yards.

Caddell made it 2-0 eight minutes later, running on to Adamson's lay-off before firing in.

The hosts always carried more threat in the final third and Heatley rattled the bar with a powerful strike before the break.

The impressive Adamson was again the creator for the third goal, his square ball setting up Owens to shot beyond Glendinning.

Caddell squandered a good chance by firing wide with just Glendinning to beat, while Josh Robinson and Colin Coates also went close for Stephen Baxter's side.

Linfield's best spell came in the final 10 minutes, starting with Lacroix blocking a a BJ Burns shot with his legs.

Quinn's 25-yard free-kick failed to curl just enough as it found the woodwork, and Philip Lowry poked inches wide on a frustrating night for the Blues.

Linfield boss David Jeffrey had already conceded the title but this defeat brought mathematical confirmation that the Gibson Cup will be leaving Windsor Park.