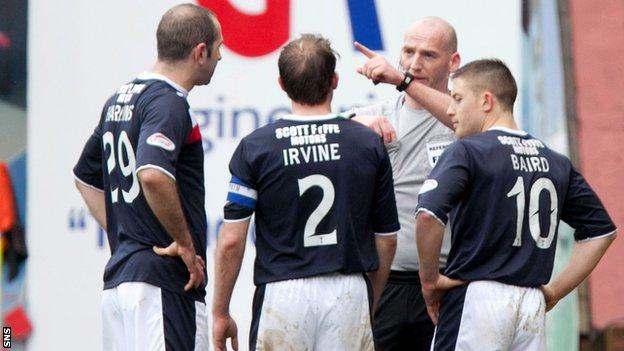 Dundee boss John Brown was proud of his players after they drew 1-1 with city rivals Dundee United despite playing much of the match with a man down.

"We took a point against a good Dundee United side for the first time this season so that can only be positive.

"We were unlucky but it is good for the players in the dressing-room at the end that they were deflated despite being down to 10 men."

The Dark Blues lost captain Gary Irvine to a 20th-minute red card then took the lead through a fantastic Ryan Conroy strike.

But the visitors were denied by a Michael Gardyne equaliser in the final minute at Tannadice.

"We knew we were not going to get many opportunities but we scored a fantastic goal," added Brown

"We caught them on the counter-attack and we hoped we would see it out but Dundee United are a good side and we were at their ground.

"I just felt for our players at the end.

"At the sending-off, Gary led with his elbow but he just went to win the header.

"I cannot fault the referee but I was a defender myself and when you are using your arms for leverage, there is a fine line between dangerous play.

"I thought the referee had a good game so I cannot complain about it.

"We have pegged a point and we wish it was three. After the sending-off you would probably say you would settle for a point but we got the goal and we are just disappointed we could not see it out.

Dundee are yet to lose in the SPL since Brown took charge last month and they now trail St Mirren by 13 points at the foot of the standings.

Their prospects of staying up remain bleak, yet Brown said: "We will keep going until someone tells us we are down.

"We have plenty of spirit and showed that again here today."

Dundee United manager Jackie McNamara was relieved to get a late leveller after seeing his side struggle to break down depleted opponents.

He said: "It's a case of mixed emotions. We didn't do all that well with the 10 men.

"It was hard but we still kept going to get the equaliser.

"I have to praise the players for that. They never gave up. We had enough chances to win but it wasn't to be.

"We're still in the running for the top-six place but we need more wins at home."