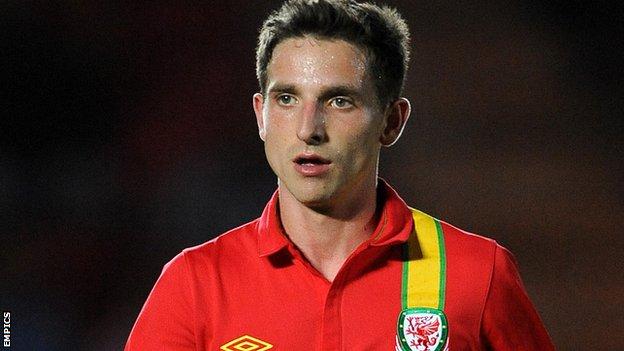 Iwan Roberts says the absence of Joe Allen is a blow for Wales in their World Cup qualifiers against Scotland and Croatia.

The Liverpool midfielder has been ruled out of the Welsh squad for the double header because of a shoulder injury.

"The loss of Joe Allen will have a big impact on the side," former Wales striker Roberts said.

The date of Allen's operation has yet to be confirmed, but the former Swansea player is likely to be out for up to three months when he finally goes under the knife.

Allen had been included in Chris Coleman's initial squad for the games against Scotland at Hampden Park on Friday and Croatia in Swansea on 26 March.

"He would have definitely started against Scotland," Roberts added.

"The disappointment for me is that Liverpool could have postponed the surgery for 10 days.

"Brendan Rodgers and Liverpool could have postponed the surgery until after the Scotland and Croatia games so that Joe could have played in the two games."

Leeds United striker Steve Morison has also withdrawn because of a calf problem with Jermaine Easter, on-loan at Millwall from Crystal Palace, called up to the squad.

Lewin Nyatanga from Bristol City has also been called up to the squad.

"I don't think Steve would have started," Roberts added.

"He didn't start the last game against Austria but he's an important part of the squad because we haven't got too many options up-front.

"Jermaine's got an eye for goal. I don't think he'll start but once again he'll be an option on the bench I'm sure for Chris Coleman.

"I don't think Jermaine's going to expect to start against Scotland but he could be an impact player to come off the bench."