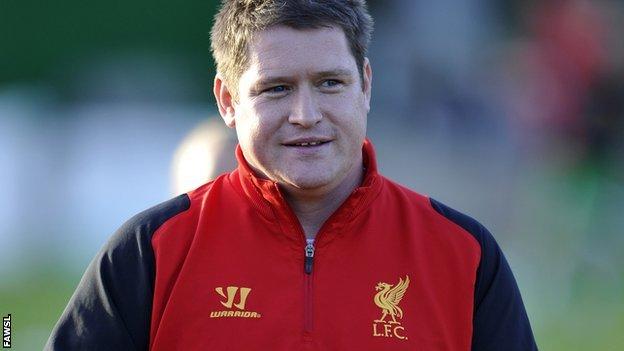 Liverpool Ladies boss Matt Beard says his side are not under pressure this season, despite major investment in the team.

The Reds' have signed 12 new players including England international Fara Williams and are expected to challenge Arsenal for honours.

Liverpool also beat Aston Villa 5-0 in the FA Cup fifth round on Sunday.

There have been big changes at Liverpool ahead of the 2013 FA Women's Super League season, after they finished bottom of the summer league in the past two seasons.

The club released 10 players and six of their new additions are from abroad, which is rare for the English league.

"We're moving in the right direction with the players we've brought in," Beard continued.

"We'll just keep working as hard as we can and hopefully at the end of the year we can be there or thereabouts.

"It's a new squad and I've told the players, they're not under pressure. The club aren't putting any pressure on us."

The FA Women's Cup opened the summer season on Sunday, while this Saturday's showpiece match sees Liverpool take on Everton in the Continental Cup - the equivalent to the men's League Cup - with the opening round of league fixtures starting on Sunday, 14 April.

Midfielder Williams scored a hat-trick on her debut against Aston Villa in the FA Cup, following her move from Liverpool's local rivals Everton in the close season.

"I didn't think about scoring to be honest," said Williams. "I've scored a few in pre season and I think with the set-up we have and the players we have, it allows me to get forward a lot more.

"It was nice to score, but we where coming to a team that were going to put pressure on us from the start, and they did.

"The pitch didn't help us but we were professional in our performance which allowed me to get the goals."

The BBC is showing the FAWSL for the first time this season, with four highlights programmes and live coverage of Euro 2013 this summer. The BBC Sport website will also also keep you up-to-date with all the latest news and scores.