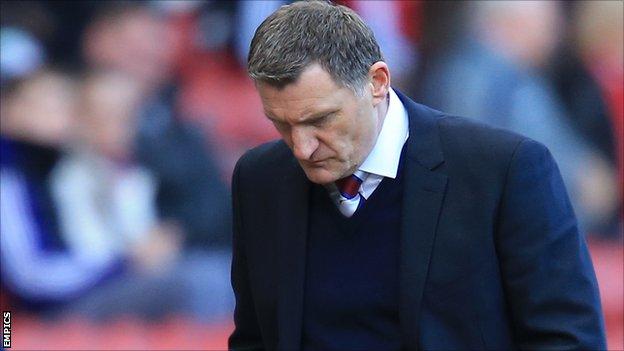 Manager Tony Mowbray says Middlesbrough cannot afford to dwell on their poor form since the start of the year if they are to revive their promotion bid.

Boro have taken only seven points out of 39 in 2013, have lost their last three Championship games and are five points adrift of the play-off places.

"We can't feel sorry for ourselves," Mowbray told BBC Tees,

"It's a tough time for us all at the moment but we have to keep going and keep believing."

Boro have lacked confidence in recent matches, but the forthcoming international break provides the team with a chance to regroup before their final eight-game run-in.

"It's a time for getting back to work and understand the only way to get out of the run we're in is to get our nose to the grind(stone)," said Mowbray.

"We have to work hard, in the first half of the season with plenty of grass and nice pitches, [we had] lots of confidence.

We are making reaching the play-offs difficult for ourselves. We understand we need to win games to give ourselves a chance and that now we have one less game to do that.

"We were moving the ball around, totally controlling games at home and winning football matches, but it's a different feel at the moment."

With recruitment hampered by financial restraints, loan signing Sammy Ameobi from Newcastle and the free agent acquisition of Kieron Dyer have represented Boro's limited additions to the squad.

However, Mowbray believes he has plenty of quality to work with, regardless of recent results.

"These are the players we have got and are working with," he added.

"I sit them down most days and give them my thoughts on work ethic, on quality, on decision-making.

"They're a really honest bunch of players who are giving us everything they've got at the moment, yet we're falling a bit short."