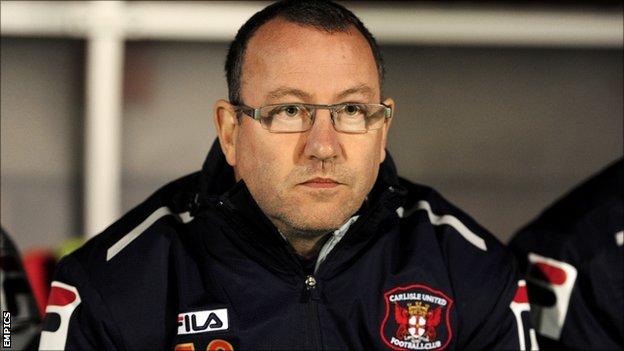 Carlisle United manager Greg Abbott has said he is committed to his role at Brunton Park, despite seeing the club slip to 17th in League One.

The Cumbrians were thrashed on Saturday, their fourth defeat in eight games.

Abbott told BBC Radio Cumbria: "I never walk away from anything in my life, never walked away from a challenge.

"A performance like that isn't good enough, isn't acceptable for me or for the players."

Pressure has been building on the United manager, who has struggled to repeat the relative success of the last three seasons.

Two consecutive trips to Wembley in the Johnstone's Paint Trophy, followed by an exciting yet ultimately unsuccessful push for the League One play-offs last season, set high standards that the current crop have been unable to maintain.

Abbott added: "We all have to take that on the chin.

"I am standing responsible, but if you want to heap all the blame on one person then just have a look at the whole situation of the club and where we are.

"Times are really difficult. We had three young players playing and key players not playing.

"We need to battle our way through this period and if we can we will regroup and be better going forward."