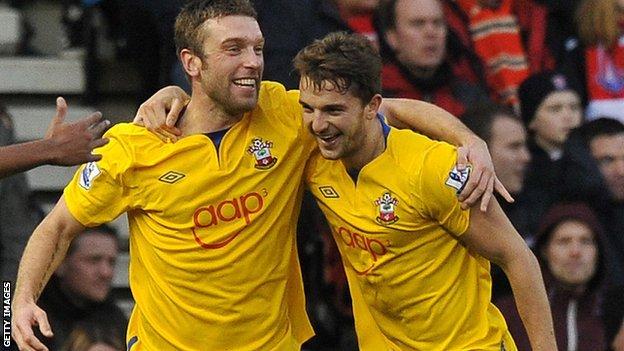 Southampton's Rickie Lambert has praised strike partner Jay Rodriguez after they both scored in the 3-1 win over Liverpool in the Premier League.

Rodriguez set up Morgan Schneiderlin for the opener and added the third goal to make it seven for the season since his summer arrival from Burnley.

And Lambert believes the team are now reaping the benefits of the pair playing up front together.

"I think Jay is a terrific player," the 31-year-old told BBC Radio Solent.

"I think his best position is as a striker in the middle, and when we have played in that position (together) we have done really well.

"It was obviously good to see him get that terrific goal at the end, I was over the moon for him.

"In training, he is on target every time. The performances have been there lately and he's been so unlucky not to get a goal, so I was so happy to see him get on the scoresheet."

Rodriguez moved to the south coast for a fee of about £7m last June, but at the start of the year voiced his frustration at a lack of first-team opportunities after just nine Premier League starts.

However, new manager Mauricio Pochettino has favoured Rodriguez and Lambert up front as Saints have pulled four points clear of the relegation zone, with eight games left.

Lambert's 13th goal of the season meant he remained the highest scoring Englishman in the Premier League, and some have tipped the former Bristol Rovers forward for an international call-up by England.

Despite the speculation, he is staying focused and goal number 101 for the Saints was extra special for the Liverpool-born forward.

"I very much enjoyed the goal," Lambert said. "Everyone knows the relationship I have with Liverpool.

"It was a massive game and my family were there, but I'm professional and my main focus was to help the team try and get three points.

"I'm really enjoying this season. Obviously there's been some lows but the highs have been unbelievable and I'm confident there's plenty more to come."

Southampton have a break before their next Premier League fixture when they host Chelsea at St Mary's on 30 March.