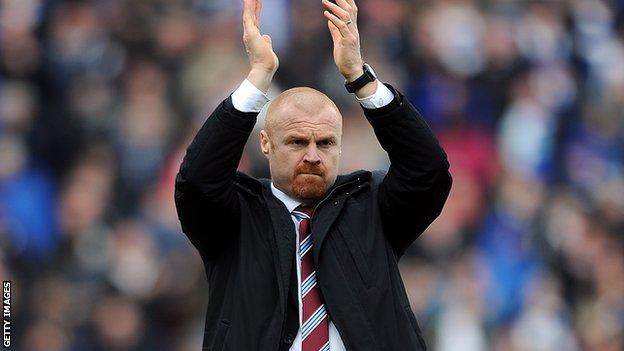 Sean Dyche believes Burnley were denied a first win at Blackburn since 1979 by an offside goal from David Dunn.

Rovers midfielder Dunn struck deep in added time to although Burnley boss Dyche thought the goal should have been ruled out.

Dyche told BBC Radio Lancashire: "I've seen it again and it was two yards offside. It inevitably hurts you.

"That's a real, real sickener when the players have worked that hard for themselves, the team and the club."

Captain Jason Shackell put Burnley in front in the Lancashire derby at Ewood Park, but the dismissal of defender Ben Mee for two yellow cards swung the game in Blackburn's favour and Dunn was on hand to prevent the Clarets taking all three points.

"Yet again, I didn't think we got parity of decisions today," added Dyche. "It seemed to me that a lot went against us.

"We've had that happen far too many times this season, but it is what it is. I'm proud of the players and the supporters."

Shackell, who netted for the first time in Burnley colours, admitted that the late equaliser had left him feeling deflated.

"I've had a few chances lately but I couldn't have picked a better game to score my first goal for Burnley. It's just a shame it wasn't the winning goal," said the former Norwich and Derby centre-back.

"It feels like we lost. I'm bitterly disappointed and frustrated. We deserved more because it was a good performance.

"We've got to take a lot of positives from it. We worked hard as a team and stayed compact when we went down to 10 men. We were unlucky not to get the win."