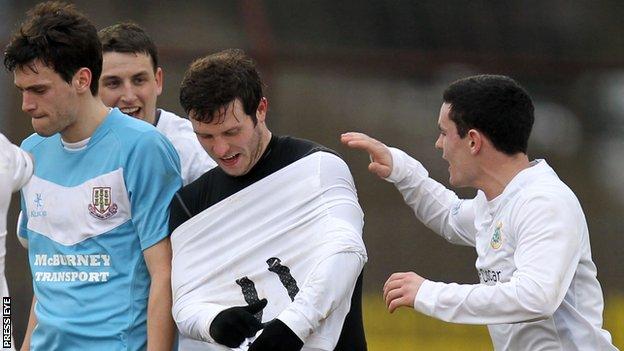 The Irish Football Association is to hold an inquiry into whether Donegal Celtic fielded a suspended player against Lisburn Distillery on Saturday.

Sean Cleary scored what turned out to be the winning goal in the bottom two clash at Suffolk Road.

But it has now been claimed he should have been serving a suspension.

Cleary got a one-match ban for picking up five yellow cards this season but then received a further one-game suspension for a red card at Ballymena.

It is believed that means midfielder Cleary should have missed two matches - the Premiership game away to Cliftonville and last Saturday's relegation clash against Lisburn Distillery.

He did sit out the 2-1 defeat at Cliftonville but played and scored in the crucial win over the Whites.

If the Irish FA decides Donegal Celtic blundered by including Cleary in their team, they are likely to be docked the three points which would probably be awarded to Lisburn Distillery.

That would cut the current eight-point gap between the bottom teams to just two points.

The IFA's Premier Clubs Committee will be contacting Donegal Celtic to request their observations and will then issue a ruling on whether Cleary was eligible to play in last Saturday's 2-1 win over Lisburn Distillery.