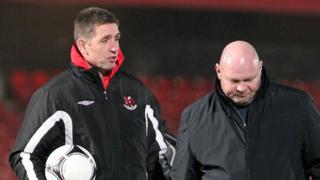 Linfield manager David Jeffrey says his side were "authors of their own downfall" in Monday night's 3-0 Premiership defeat by Crusaders.

Jordan Owens (2) and Declan Caddell were the goalscorers for the second-placed Crues.

"We were not good enough and to lose a match in that manner, with three defensive mistakes, is very disappointing," said Baxter.