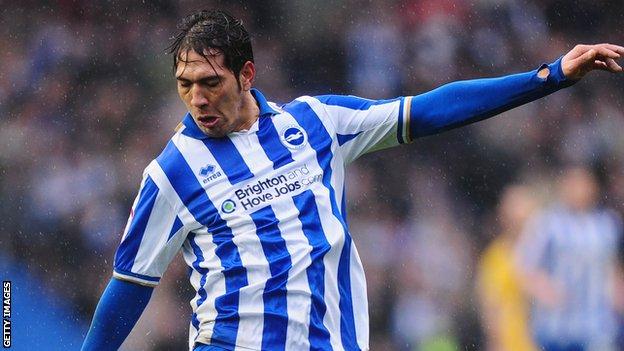 Brighton's Leonardo Ulloa hopes the two goals he scored in Sunday's win over Crystal Palace helped make up for his midweek penalty miss at Barnsley.

The Argentine striker, 26, had a late spot-kick saved on Tuesday that would have brought the Seagulls level at 2-2.

"It's always tough when you miss a penalty, especially when it costs points," he told BBC Sussex.

"[Against Palace] my performance and the team's was very positive. I'm happy for us and the fans after a bad week."

My body is delighted to have a two-week rest. The intensity of the English game means this week I was getting really tired.

The £2m January signing from Almeria has made a great start to life at the Amex Stadium, scoring eight goals in his first 11 games.

Last season he scored 28 times for the Spanish Second Division side, prompting Albion boss Gus Poyet to bring him to the Championship.

"I scored a lot of goals last season but it wasn't enough to get promotion," he continued.

"Hopefully this season I can help get Brighton into the Premier League - the fans here are amazing, we just have to give them the 100% they deserve.

"My body is delighted to have a two-week rest [for the international break]. The intensity of the English game means this week I was getting really tired."