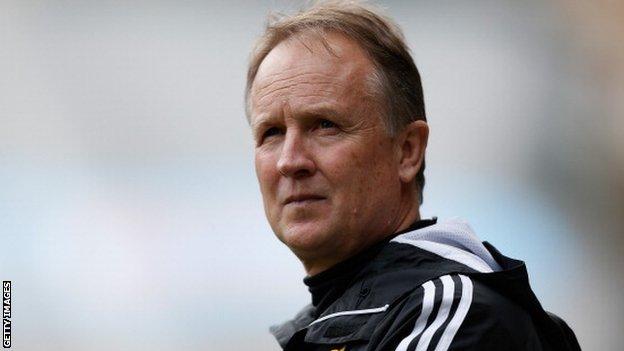 Bristol City head coach Sean O'Driscoll has said his attempts to bring in players on loan is proving "difficult".

City have a number of injuries and he is keen to strengthen his squad as the club fights against relegation.

Saturday's 2-1 loss to fellow strugglers Wolves left City three points adrift at the foot of the Championship, but they now have a break before their next game at Derby on 29 March.

And O'Driscoll indicated he would be continuing his search during the international break, adding: "There's always potential, I keep saying that."

City are bracing themselves for more bad news from their medical department during the two-week hiatus.

Midfielder Paul Anderson is to undergo a scan after suffering a knee injury at Molineux on Saturday, while striker Jon Stead could miss the rest of the season after tearing a groin muscle.

O'Driscoll said City's management, players and supporters would all have to pull together during the eight-game league run-in if they were to remain in the Championship.

He told BBC Radio Bristol: "This is going to be a three-way thing. We've got to play our part, the players have got to play their part, and the fans. Everybody is trying their hardest."