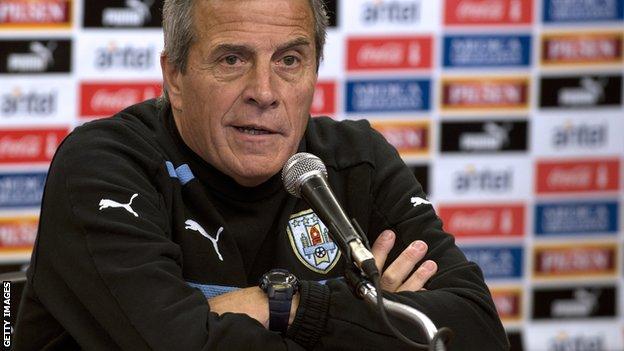 My last two pieces focused on the development of the game in two nations at opposite ends both of South America and of the continent's footballing tradition - Uruguay, first kings of the global game, and Venezuela, the new kids on the block.

As fate would have it, when World Cup qualification resumes this Friday, these two national teams are level on 12 points from nine games, slap bang in the middle of the fight for a place in Brazil next year.

Four and a half slots are available - the half slot refers to a play-off place against opponents from Asia. As the marathon campaign moves into the final stretch, three of those places are close to being snapped up as Argentina, Ecuador and Colombia have broken away from the pack.

It is entirely likely that 25 points will be good enough to seal qualification - in which case Argentina are just two wins short, and Ecuador and Colombia only need three. Something will have to go badly wrong for these three nations to fail to make it across the line.

At the other end of the table there is a bottom group of three - Bolivia, Peru and Paraguay. They are down but not yet out, some five and six points behind the middle three - a gap that is not impossible to make up with seven games still to go.

The chances are, though, that the remaining one and a half slots will go to teams in the middle of the pack, where Uruguay and Venezuela are joined on 12 points by Chile. As it stands it seems that one will qualify automatically, one will have to make do with the play-off and one will miss out altogether.

The stakes are high, then, and the permutations are many. There is one simple way to demonstrate the glorious unpredictability of the most competitive World Cup qualification around.

Uruguay are at home to the bottom team in the table, Venezuela are away to the team at the top. And yet nothing is guaranteed. All outcomes are possible.

Back in June Uruguay were a point behind the leaders with a game in hand. True, the side was ageing, but the hope was that a new generation would emerge from the London Olympics. Instead, it all went wrong. The Olympic campaign was a disaster - no reputations were enhanced - and the senior side are now coming off a dreadful sequence of results in the last four rounds, accumulating three heavy away defeats and a somewhat fortunate home draw.

Oscar Washington Tabarez, the architect of the sky blues' recent rebirth, was put in front of one of the most testing dilemmas a coach can face. He had built a side. Could he now break it up and rebuild?

His response has been to tinker rather than to transform. Diego Forlan lost his place in the starting line up, allowing Edinson Cavani to operate closer to the opposing goal. And he also dropped one of his two guard-dog defensive midfielders, in search of a side able to have more fluidity in possession.

The new-look team looked very impressive in its two friendlies - a 3-1 win away to Poland in November and a defeat by the same scoreline to world champions Spain last month. They were the best performances the team had produced since the 4-0 win over Chile towards the end of 2011. But now comes a test against the ever-durable Paraguayans.

Paraguay's problems in the early stages of the current campaign were entirely predictable. An excellent cycle had come to an end. Changes were needed. But an inexperienced coach, Francisco Arce, tried to make them too quickly.

His replacement Gerardo Pelusso now seems closer to finding a blend. Recent performances have improved, leading to hopes that there might still be time to sneak an appearance in a fifth consecutive World Cup. To keep such hopes alive they must not come back empty handed from Montevideo.

The next match, four days later, is even trickier - a visit to the altitude of Quito to meet Ecuador, the only team with a 100% home record. The focus, then, must be on beating Uruguay. The clash of these two neighbours is unlikely to be one for the aesthetes. It will not be pretty, but it will be intense.

If the same is true of the Argentina-Venezuela game it will mean that the visitors have a chance of going home happy, since they will have controlled Lionel Messi and his gifted supporting cast.

Venezuela managed to do so comfortably enough in their home game, which they won 1-0 back in October 2011. Since then, though, Argentina have made huge strides. When Messi, Sergio Aguero, Gonzalo Higuain and Angel Di Maria all fire together they can be irresistible.

But there is a price to pay for fielding so much attacking talent. Coach Alejandro Sabella acknowledges that the balance of his team is tilted towards attack, and that his defence can be left exposed, especially down the flanks. "Sometimes," he said recently, "I have to cover my face when the other side is attacking us."

Meanwhile, Venezuela coach Cesar Farias has made a priority of tightening up his team's defence - and they have conceded just nine goals in nine games, half as many as their direct rivals Uruguay and Chile.

If the organisation of his side can hold Argentina at bay, then there is always the possibility that the power of Salomon Rondon or the pace of Josef Martinez can trouble the home defence on the break.

Of course, with Messi in such immaculate form an away win is unlikely. But the mere fact that an Argentina team packed with stars have cause for concern at home to Venezuela is evidence that, at national team level at least, South American football is in good health.

If goalkeeper Mark Cook had stayed at Universitario in Peru, and with the club competing in a continental competition, would he have been playing at a high enough standard to be considered for international selection? England always seems to treat the few players abroad with a certain degree of suspicion.

I'm all in favour of English players moving abroad to develop as people and as players, though I suppose you could argue these days that the world comes to them in the Premier League.

Specifically about Mark Cook, there are too many 'ifs' involved. Nobby Solano took him over when he was coaching Universitario last year. The idea, I think, is that his size and capacity to dominate his area would give him a differential in Peruvian football. He only had a couple of games and did nothing wrong - though I think one of the lessons from the experience is that a keeper really needs to speak the same language as his defenders.

There's also the fact that Universitario are going through a financial crisis. Results have suffered and they are not currently taking part in continental competition.

I have the feeling that Brazil have pressed the panic button selecting Big Phil Scolari as coach, despite his win in 2002.

Sadly I see no game breakers in the present line up, nothing like the 3 Rs [Ronaldo, Rivaldo and Ronaldinho} up front in 2002-surely Brazil cannot expect Neymar to lead them to victory without European club experience in big competitions.

I feel Scolari does not have the ammunition this time creatively to win the tight matches, or have they decided that pragmatism will rule the day- surely not enough to win the World Cup in Brazil with all the demands of flair and style.

Will Scolari last the distance to 2014 or will he be replaced as well if results go against him?

Never say never, but I think another coaching change is highly unlikely. They would have to have a real nightmare in the Confederations Cup for something like that to be considered.

In his own defence, Scolari could point to the fact that a year before 2002 it was all but inconceivable that Brazil would be champions- they plumbed the depths of incompetence during the qualification campaign.

At home the demand for victory is greater than any concerns with style, and Scolari will take the first steps down the road of pragmatism in the coming friendlies against Italy and Russia. He was alarmed by the way his defence was exposed against England last month - especially by how Jack Wilshire managed to play his two central midfielders, Paulinho and Ramires, out of the game in setting up England's first goal. I'm sure that we will now see a specialist defensive midfielder sit in front of the back four.