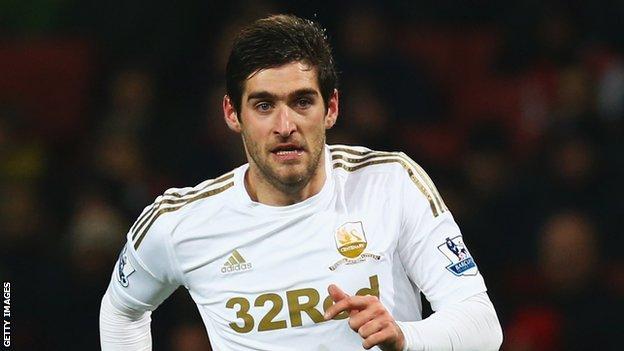 Watford have been placed under transfer embargo and former owner Laurence Bassini banned from football for three years for financial misconduct.

However, the promotion-chasing club, currently third in the Championship, escaped a points deduction and fine.

The Hornets and businessman Bassini were charged last August with a breach of Football League rules.

One of those breaches related to the

Under the terms of the embargo, Watford can still sign players with prior permission from league officials.

The embargo will last until the end of the summer transfer window on 31 August.

An independent Football Disciplinary Commission found that the club should have been placed under a transfer embargo on 26 September 2011 until Bassini sold the club to the Pozzo family in June 2012.

The commission stated that Watford signed eight players in that time and although determining that the club gained a sporting advantage from those transfers, it did not deem a points deduction necessary.

Defender Nyron Nosworthy, who constitutes two separate signings as he joined on loan before agreeing a permanent deal, is the only one of those eight arrivals to feature this season, playing 21 games.

The Hornets are pursuing a place in the Premier League and are currently two points off an automatic promotion place.

Watford and Bassini were found guilty of failing to inform the Football League of financial agreements set up with a company called LNOC.

These agreements, which were shown to be arranged by Bassini and his advisor Angelo Barrea without the club's knowledge, led to Watford being given funds by LNOC, in return for money from the transfer of Graham to Swansea and the club's share of the Championship's TV rights deal.

The commission found that Watford received £951,041 from LNOC on 21 September 2011 in exchange for a return of £1m, which was guaranteed in the form of the two remaining £500,000 payments from Swansea for the purchase of Graham.

In the same month, LNOC handed a sum in the region of £1.66m to Watford, guaranteed against two £900,000 instalments from Watford's share of central Football League money.

The Football League requires clubs to name any third parties who possess an interest in a transfer contract and says it was never told of LNOC's involvement in the Graham transfer.

It also requires notification within 24 hours if a club has made plans to redistribute central funding to a third party, which it never received.

Had Watford declared this arrangement, they would have been immediately placed under transfer embargo.

The club were unaware of the funding from LNOC, as the money was paid into an account belonging to Watford FC Ltd, the company setup by Bassini to hold his majority shareholding.

The breaches have no connection with Watford's current owners, the Pozzo family.

"It is clear from the decision of the Football Disciplinary Commission that the offences which the club has been found guilty of were committed by one or two individuals who are no longer associated with the club - and without the knowledge of the full board of the club," read a club statement.