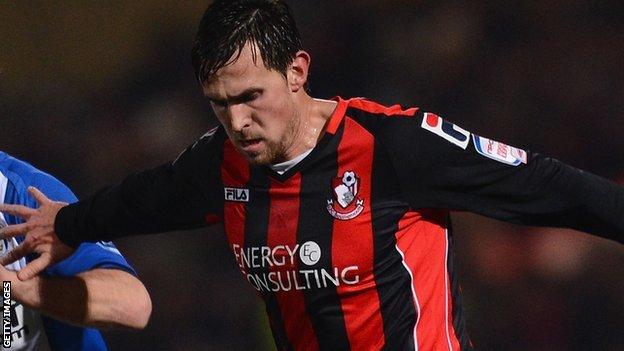 Bournemouth manager Eddie Howe has admitted he took a gamble by playing defender Charlie Daniels in the 1-0 victory at Oldham.

Daniels made his first appearance since 22 January on Saturday after recovering from a persistent foot injury.

Howe included the 26-year-old sooner than planned because his options at full-back were limited by injuries.

"We were desperate to get him back because he is a very good player," he told BBC Radio Solent.

"It was a makeshift back four. Charlie's our only left-back and played 60 minutes without a training session.

I think the lads are a very good group. They work extremely hard, they listen and they're not arrogant enough to think they can't improve

"I knew I was taking a bit of a punt because he'd not trained and had only done a little bit of work with the fitness coach.

"But he felt good and was brave enough to put his hand up and say 'I'll play'."

The former Leyton Orient defender had been out for more than eight weeks, while fellow defender Tommy Elphick, who was also involved as an unused substitute, had not played since early February because of a knee problem.

Howe said: "Tommy was probably slightly ahead of Charlie during the week actually, but we haven't got that pressure on us at centre-half with them doing so well at the moment.

"Tommy is the leader of the team, he's the voice of the team, and it's great to have him back involved in the changing room."

The win lifted Bournemouth back into the League One play-off places and Howe was pleased to see his side's resilience pay dividends.

"We're delighted with the win. I think if you look at the two fixtures on paper, Stevenage away and Oldham away, they're tests of character," he added.

"They're difficult places to come, and we've managed to get two wins so I have to give the players credit for taking things on board and becoming more resolute, harder to beat and defending better.

"I think the lads are a very good group. They work extremely hard, they listen and they're not arrogant enough to think they can't improve."