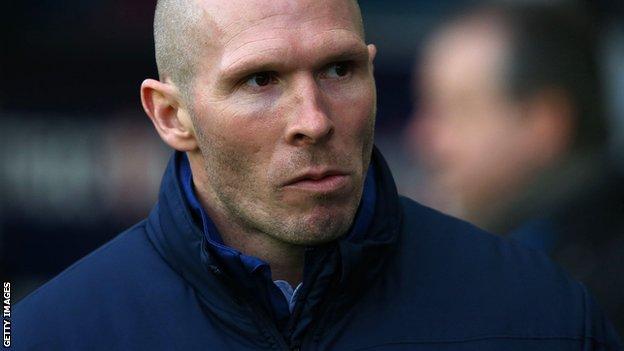 Manager Michael Appleton admitted he could feel the weight of history on his shoulders during the closing stages of Blackburn's 1-1 draw with Burnley.

earned a point for Appleton's side.

And it preserved Blackburn's record of not losing to their Lancashire rivals at Ewood Park since April 1979.

"I certainly didn't want that on my CV so it was a relief and a good feeling when Dunny slotted the ball in," Appleton told BBC Radio Lancashire.

"You're just wondering if, yet again, it's not going to be your day.

"We peppered their back line as much as we could in the second half. Once they went down to 10 men, they sat in as you would expect. Luckily we had one ball that dropped for us right at the end."

Dunn's season has been severely disrupted by injury, but has and netted for the first time in more than a year against the Clarets.

The former England midfielder is out of contract at the end of the campaign, but Appleton has confirmed he will look to offer the 33-year-old a new deal if he can replicate his recent performances in the final nine Championship matches.

Appleton added: "He [Dunn] needs to continue the form he's shown in the last two or three games. If he does so, we'll be sitting down and having a discussion with him.

"I want to see him do it and repeat it over a decent period of games and hopefully he'll do that."