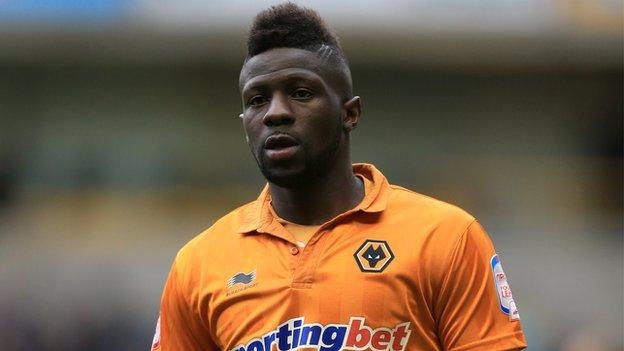 Edwards (possible broken foot) and Sako (hamstring) went off before Wolves came from behind to beat Bristol City 2-1.

Added to that, keeper Carl Ikeme came off at half-time with a "hand injury".

I had a go at everybody. I told them that they were sitting there waiting to slide to the bottom of the league and that they'd got to do something about it

"He's probably our best player, so that's a disaster. Then Dave Edwards goes down. I don't know if he's broken his foot."

Those two incidents both came in the calamitous quarter of an hour that followed the David Davis own goal which earned the visitors a surprise lead in the battle of the Championship's bottom two.

"It was an absolute calamity goal, a disaster when there was nothing happening," said Saunders.

"Carl rolled it to David Davis, who's rapped it back at him, into the middle of goal, instead of passing it wide.

"You work out when you're very young to pass it to the side of the keeper.

"He's made a mistake there, Dave, and it's gone in but Carl could have got something behind it. He could have picked it up, anything but let it go in."

Saunders denied that Ikeme's part in the shambles led to him being substituted, pointing out that he actually came in at half-time carrying a hand injury.

"Carl hurt his hand on the pitch and that made my mind up," added Saunders. "He may need an x-ray."

Saunders was nonetheless proud at the way his players responded to his half-time tongue lashing.

"I told them that they were sitting there waiting to slide to the bottom of the league and that they'd got to do something about it, find something inside them and show a bit of character, which they did.

"We were down and out at half-time. Everything seemed to be going wrong. But we've dug in and got a result. That's seven points from four games and we're now on a bit of a roll."