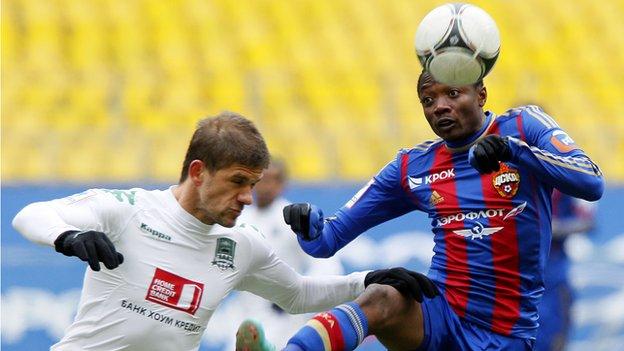 Nigerian forward Ahmed Musa has his sights set on wining the Russian title with his club CSKA Moscow.

Musa, 20, has tasted glory already this season, winning the Africa Cup of Nations with his country and now he is eager for more success.

"After winning the Nations last month, now I have a solid chance to win the Russian title with CSKA," said Musa.

CSKA top the table with 49 points from 21 matches, seven points ahead of closest rivals Anzhi Makhachkala.

I feel I've learned plenty of new things here in Russia. It's a really great experience

Musa's goals have been a big part of CSKA's success and the striker has a hunger for more.

"This season I also top the club's scorers' list and also have chances to top the league scorers' table, which is very encouraging. I love to score goals and to benefit my club," he said.

Musa has scored nine goals this season so far and is three goals behind Spartak Moscow's Yura Movsisyan, the top marksman in the Russian league.

He said he had seized his chance after fellow forwards Seydou Doumbia and Tomas Necid were sidelined with injuries, justifying coach Leonid Slutsky's trust in him.

"It's a serious responsibility to spearhead the attack of such an eminent club as CSKA. And I'm happy that our coach had chosen me for this position. I'll do my best to give him no chance to regret his decision," said Musa.

Musa also said that he felt he was progressing well having joined the Red Army club last year from Dutch top-flight side VVV Venlo.

"We speak often with the chief coach Slutsky and he's always ready to give me good advice," Musa, who has scored four goals in 25 games for Nigeria, said.

"I feel I've learned plenty of new things here in Russia. It's a really great experience."