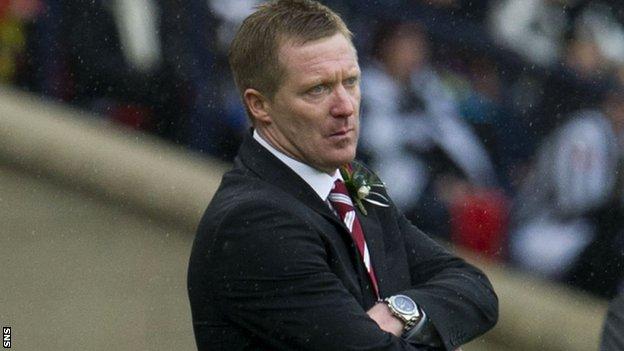 Locke, installed on the eve of the final, watched the Buddies make Hearts pay for not building on their early lead.

He said: "It's a sore one. Myself, the staff and the players are really hurting.

"If we could've got the second goal we probably would've gone on to win it."

Most fans at the national stadium would agree with that assessment for the Tynecastle side had completely outplayed Danny Lennon's men for the first 35 minutes of the match.

Ryan Stevenson kept his cool to arrow a shot off Paul Dummett's leg on its way past Craig Samson to give the Scottish Cup holders a 10th-minute lead.

With Andy Webster and Danny Wilson untroubled at the heart of the maroon defence, Mehdi Taouil was free to orchestrate the play as Hearts continually picked up possession from Saints' hurried clearances.

John Sutton, starting up front with on-loan Liverpool striker Michael Ngoo, hit the post with a header and Taouil's cross-come-shot evaded the St Mirren rearguard, flat-footed Ngoo and the goal.

Those were the two key chances for Hearts to put the 67th Scottish League Cup out of St Mirren's reach.

Instead, with eight minutes to half-time St Mirren's talismanic centre-forward Steven Thompson won possession in midfield and slid a pass through for Gary Teale to run on to, obliterating Hearts' offside trap in the process.

His pass across the box was converted by Esmael Goncalves.

An inspirational team talk by Lennon had St Mirren racing out the traps after the interval and Thompson's 46th-minute strike turned the match on its head.

Conor Newton added a third before Stevenson scored a late second to set up a tense finish as St Mirren held on to lift the cup for the first time.

"At the time we looked the more likely to get a second goal rather than St Mirren equalising," said a crestfallen Locke afterwards.

"We needed the second goal to give us a cushion but by not getting that it gave St Mirren the chance of getting back into the game and to their credit they did that.

"But it was a poor goal, defensively.

"The start of the second half was the turning point for me. We just didn't get going at all.

"There are always defining moments in games. If Sutty scored with his header it probably would have been a different outcome but it's all ifs and buts.

"We didn't take our chances and we are sitting here as losers."

Having been appointed interim manager after John McGlynn's sacking last month, Locke was given the full title at the end of last week.

As a Hearts fan then player and coach, Locke was thrilled to be leading the team out at Hampden, though he was quick to acknowledge that it was his predecessor's efforts that had taken the club to their second final in 10 months.

Stevenson's second goal had Locke imploring the Hearts fans to roar their team on for an equaliser but there was only frustration for this impassioned figure in the technical area in the remaining minutes.

"It just wasn't meant to be. Full credit to the players. They never gave up," said Locke, who noted that he had not spoken to club owner Vladimir Romanov before kick-off.

"That's the type of commitment and desire required at this football club. I cannot fault the players in terms of effort.

"We set the team up to win the game. I was pleased about a lot of the stuff but we shot ourselves in the foot with the way we started the second half.

"We put a lot of balls in the box. You are just hoping it drops to one of your boys but unfortunately for us it didn't.

"The supporters deserve a special mention for the way they have rallied round the club. We would have liked to have given them a trophy.

"The players and he fans gave us everything and that is the only way the club is going to move forward."