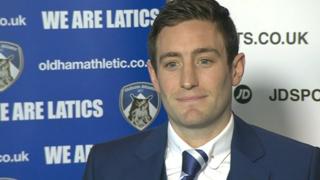 Lee Johnson says he is excited by the task that lies ahead as manager of League One strugglers Oldham Athletic.

He adds that he has spent much of the last decade travelling the world to prepare himself for a career in management.

Johnson, the son of Yeovil boss Gary, is due to come up against his father's team at Boundary Park on 16 April.