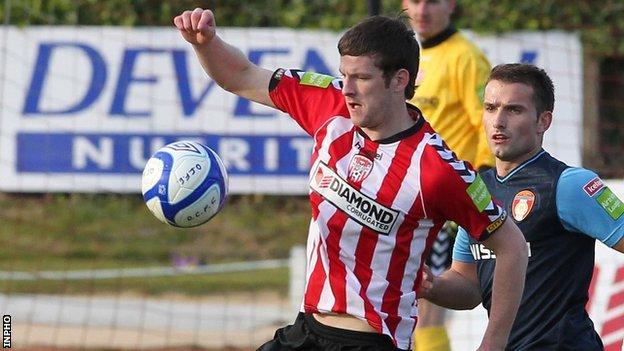 The Candystripes had led through Ryan McBride's header on the half-hour mark after Rory Patterson had nodded back into the danger area after a corner.

Derry had a number of chances to extend their lead but Drogheda keeper Gabriel Sava made a number of fine saves.

Drogheda equalised in the 81st minute when Michael Daly poked in during a goalmouth scramble.

That sparked Derry into a bit of urgency but in the end they had to settle for a point against the team which finished runners-up to champions Sligo in last year's Premier Division.

Italian keeper Sava was the hero for Drogheda as he made the saves which kept the visitors in the match.

He denied Patterson on a number of occasions when the Derry striker got through and he also saved from Michael Rafter and Mark Griffin.

The result leaves Derry on four points from their first three matches in the 2013 campaign.