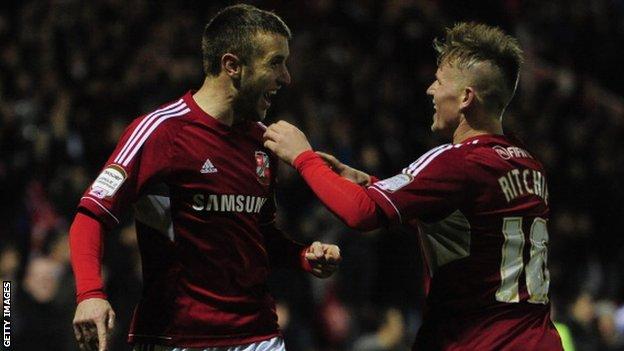 Swindon striker Andy Williams will try and shut out any negative reaction when he faces former club Yeovil on Tuesday.

The 26-year-old, who left Huish Park last summer, insists he will not take it personally if some Yeovil fans give him a less than warm reception.

"Everyone's entitled to their opinion. I've no idea what response I'll get.

"Unless you spend a lot of years at a club and done very well, you very rarely get a decent reception these days," he told BBC Wiltshire.

"As Yeovil fans, they might possibly have liked to see me stay at the time."

"But I think they've moved on from that and they've got a number of good strikers and it doesn't look like they are particularly missing me.

"Any old player that goes back tends not to get a great reception. It's not going to be too bad, so hopefully I won't let it affect my performance. You don't tend to hear the fans once you've started playing."

Williams scored 16 League One goals for Yeovil last season and was offered a new deal by the club, only to turn it down in order to join the Robins.

"I had a great two years there. I went there at a bit of a low in my career and Terry Skiverton and the gang there helped me out and put me back on track," he added.

"I managed to get a few goals in my first season and doubled it in the second. It was nice to get playing regularly again and to be enjoying my football again.

"It's certainly what I did there, so I have a lot of people to be thankful for at the club."