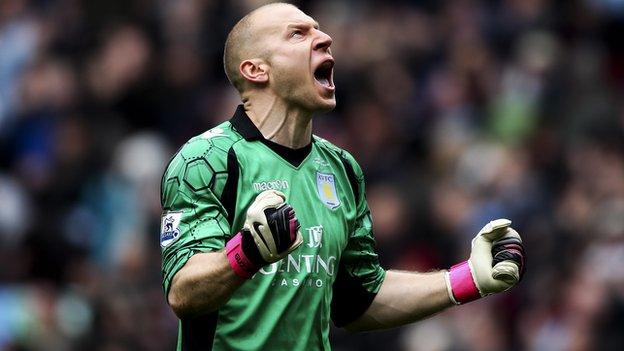 Aston Villa goalkeeper Brad Guzan admits they need to keep supporters on their side as they continue their battle to stay in the Premier League.

The 28-year-old American played a big part in raising the Holte End roof in Saturday's 3-2 win over QPR, rescuing Villa with a string of key saves.

And Guzan acknowledged that the players are lifted by vocal fans' support.

"When Villa Park gets rocking, there's a buzz and an electricity on the field that gives us a boost," he told BBC WM.

"The fans were brilliant. They know when to get behind us."

Villa's victory over QPR followed a 2-1 win at another of their main relegation rivals, Reading - the first time they have recorded back-to-back Premier League victories since May 2011.

And coming from behind to win for the second time in eight days also lifted Villa three points clear of the relegation zone going into the international break, a big psychological boost with only eight games to go.

"They're all important," said Guzan.

"There's a lot of football to be played. Nothing will be sorted until the end of the season, but we knew what was on the line and, when you beat the teams in and around you, it does make it all the sweeter."

Although Guzan's array of first-half saves were crucial, most notably an incredible leap to keep out Christopher Samba's header, the modest keeper preferred instead to highlight the timing of Gabby Agbonlahor's equaliser.

"I wouldn't necessarily say it took the wind out of their sails but a goal before half-time is crucial for everybody," he added.

"Gabby's the type of guy who knows what this club is all about. And, apart from his goal, he was fantastic in his work rate.

"Like Christian Benteke and Andi Weimann, we know all three of them can score goals, but there are certain points in games when you need guys to work at both ends and they all did a great job."