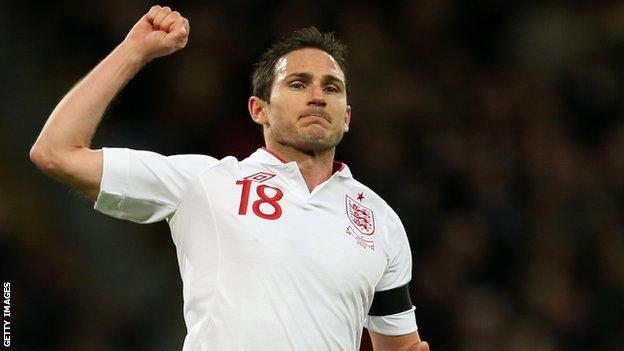 Lampard, 34, is six short of 100 caps heading into World Cup qualifiers against San Marino and Montenegro on 22 and 26 March respectively.

"You really appreciate it as you get older every time you play for them," said Chelsea player Lampard.

"I'm enjoying being a part of it. It's a very happy, comfortable squad with Roy in charge."

Lampard scored in Chelsea's win against West Ham on Sunday to take his goal tally for the Stamford Bridge club to 200.

He has 27 goals for England and, although he is closing in on a century of international appearances, he is remaining coy on the issue.

"It's 94 [caps]. But six caps in international football is still a relatively long way. So I'll take it cap by cap," he added.

The England squad has been hit by controversy before the two games coming up after Manchester United centre-back Rio Ferdinand withdrew from the squad.

Ferdinand, 34, pulled out because of his "intricate pre-planned programme" when it comes to his fitness.

Lampard, a former team-mate of Ferdinand at West Ham, says he needs to keep active to stay on top of his game.

"As I've got a bit older I've found I feel better when I play regularly and keep training," he said.

"If I had a week in Dubai I'd probably stiffen up and take three weeks to get back. So I much prefer staying involved and staying fit."

A player who is renowned for coming from midfield to score goals, he has had to readjust his game playing in a deeper role for Chelsea,

"With experience you can play the deeper role and try to arrive at just the right time, a bit less often but with a bit more effect," said Lampard.

"I think I probably learned to play this way when [former Chelsea manager Roberto] Di Matteo came in in the run-up to the Champions League final [last season].

"I've developed a bit more and now I'm able to play deeper and still arrive in the area."