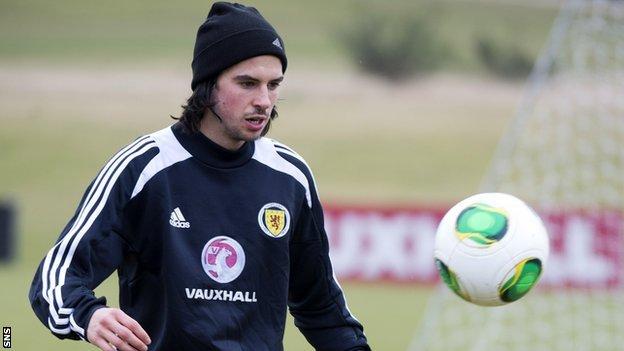 Scotland winger George Boyd has warned against concentrating too much on the threat posed by Welsh star Gareth Bale.

The Scots host Wales in a World Cup qualifier on Friday, with much attention focused on how they will deal with the in-form Tottenham attacker.

But Boyd has urged his side not to focus solely on Bale's threat.

"He's a world-class player - but he's only one man, he's not the whole team. It would be foolish of us just to concentrate on one player," he said.

However, the uncapped player, currently on loan at Hull from Peterborough, admitted that he had unhappy memories of the last time he faced Bale.

I think he once tried to sign me when I was at Peterborough and he was at Middlesbrough. It didn't work out then, so I'm just delighted he's given me the chance to show what I can do here

"I remember playing against him in the FA Cup for Peterborough and he destroyed me," he said.

"I spent most of the time running towards my own goal that game.

"He's on fire at the minute. He's got power and pace and he's added goals to his game this season, so he's close to becoming the complete player."

The 27-year-old also thinks that a win over the Welsh could re-invigorate Scotland's stuttering qualification campaign.

The Scots currently sit bottom of Group A, with two points from four matches.

"It's a big game on Friday, if we can get the win there, then who knows," he said.

Boyd also revealed that Scotland manager Gordon Strachan had tried to sign the player when manager at Middlesbrough.

"I think he once tried to sign me when I was at Peterborough and he was at Middlesbrough," said Boyd.

"It didn't work out then, so I'm just delighted he's given me the chance to show what I can do here."

And, for Boyd, the appointment of Strachan to the national side led to renewed optimism of a call-up to the full squad.

"Playing for the Scotland B squad was a great experience. Obviously, it took a bit longer than I would have liked to get into the main squad.

"He did show an interest in me earlier, so he obviously likes me as a player, so it does give you hope."