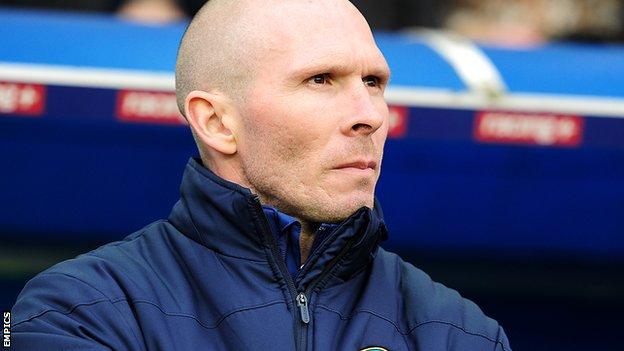 Appleton, who left Blackpool is replaced by reserve-team coach Gary Bowyer for the remainder of the season.

"It's a comedy club at the moment and Blackburn are the butt of the jokes."

"I am disappointed to be leaving Blackburn Rovers," said Appleton.

The 37-year-old, who began the season at Portsmouth before his short-lived stints at Blackpool and Blackburn, added: "I would like to thank the players, and wish them all the best for the rest of the season.

"I would also like to say thanks to the fans who have made me feel so welcome over the past few months."

Appleton won four of his first seven games in charge of Rovers, but Blackburn have failed to win since knocking Arsenal out of the FA Cup and are 18th in the table, just four points above the relegation zone.

A brief statement on the club website said: "Blackburn Rovers FC can confirm that Michael Appleton has been relieved of his duties as manager along with assistant manager Ashley Westwood, first-team coach Darren Moore and head of senior recruitment Luke Dowling."

Appleton, who started the 2012-13 season in charge of troubled League One outfit Pompey, but was manager at Bloomfield Road for just over two months before switching to the Seasiders' Lancashire rivals.

Despite losing his first game at home to Charlton, his reign at Ewood Park began positively, the highlight being a that meant Blackburn progressed to the last eight of the FA Cup.

His last match in charge was a on Sunday, although Blackburn needed a stoppage-time equaliser from David Dunn to avoid a first home defeat by the Clarets in 34 years.

In a statement released via his PR company, Appleton said: "I am disappointed to be leaving Blackburn Rovers. I would like to thank the players, and wish them all the best for the rest of the season. I would also like to say thanks to the fans who have made me feel so welcome over the past few months."

Blackburn's return to the second tier of English football after 11 seasons in the Premier League has been dominated by off-the-field issues, not least the uncertainty surrounding the managerial position.

Only Wolves have a worse record than Blackburn in the the last 10 Championship games:

Kean was "forced to resign" in September, with Blackburn in the Championship's top six, following months of protests from a section of Blackburn supporters against the Scot and owners Venky's.

Norwegian Berg, a former Rovers defender who won the Premier League title with the club in 1995, was but won only one of his first 10 games as manager and was dismissed after just 57 days.

Blackburn were resurgent under Bowyer, winning three and drawing one of their four matches in all competitions under their reserve-team coach, before Appleton's appointment in January.

Rovers have nine games remaining to preserve their Championship status and avoid a second consecutive relegation.

Blackburn's record goalscorer Simon Garner, who played for the club between 1978 and 1992 and scored 194 times, told BBC Radio 5 live: "I can't believe it. There were no murmurings, heard nothing that this was going to happen. After the last couple of results, Millwall and then Burnley, perhaps they were the final nail in the coffin.

"I don't know if anyone would want the job. Three managers in a season - it looks like you lose a few games and you're sacked. Venky's don't seem to know how to handle a manager and the fans."

Last week, Dr Who actor and Blackburn fan Matt Smith said: "It's an absolute farce, a joke, it's being run by complete numpties. Great players, great team, great club and those berks have ruined it.

"They talk about getting rid of [former manager Sam] Allardyce because of the long ball - what the hell was that against Millwall?

"It was a woeful performance. It's the first time I've been embarrassed at the way the team played."