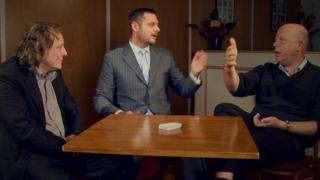 The chairmen of Peterborough United, MK Dons and Northampton Town discuss whether financial fair play - a system designed to make sure clubs do not spend beyond their means - will work.

Posh chairman Darragh MacAnthony says he could not afford to pay boss Darren Ferguson a wage when the Scot rejoined the club two years ago.

Watch the latest episode on the iPlayer.