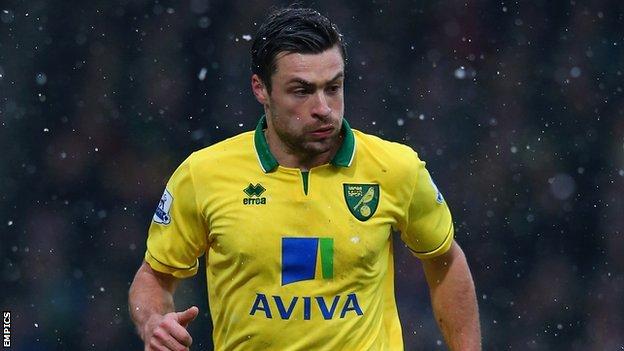 Norwich City defender Russell Martin believes two more wins will be enough to keep his side in the Premier League.

The Canaries battled to despite playing most of the game with 10 men, to take their points tally to 34.

"Two more wins should definitely do it," Martin told BBC Radio Norfolk. "It's a big ask for the teams below us to get to that 40-point mark.

Points on the road

Sunday's 1-1 draw at Sunderland was Norwich's seventh away stalemate this season, the highest in the Premier League

"We want to get to 40 points as quickly as possible and see where we go."

It has left the Canaries in 12th place, with a seven-point cushion over the relegation zone during the two-week international break.

And the manner in which they comfortably held on against Sunderland, following keeper Mark Bunn's sending off after half an hour, offered encouragement to Martin.

"This gives us a good feeling for the next couple of weeks. We didn't lose, we put in a good performance and got a big point," said the 27-year-old, who is in the

"We can feel good for a couple of weeks and some of them can have a rest.

"We play Wigan in the next game, another team around us. So I think if we get those two wins on board quickly we'll be fine."