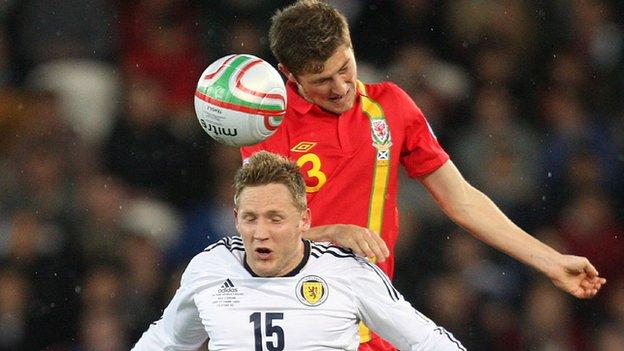 Mickey Thomas says the current Scotland team is the worst he has ever seen and predicts a Wales victory in Friday's World Cup qualifier in Glasgow.

Former Wales and Manchester United midfielder Thomas says the Scots are a shadow of "great" teams of the past.

Scotland, who lost to Wales in October, are bottom of Group A having failed to win any of their four matches.

"Wales should go there and get a victory, whether [Gareth] Bale is in the side or not.

"I played against the likes of [Kenny] Dalglish, [Graeme] Souness and [Alan] Hansen. They were a great team - they don't have that any more. They haven't got a top player.

"We saw in Cardiff, they have nothing really of quality to hurt [Wales]."

Neither team is likely to qualify for the finals in Brazil next year, with Scotland having drawn two out of four qualifying matches and Wales' win over the Scots providing their only points.

The Scots led 1-0 for much of the game in Cardiff and appeared to have a perfectly good goal ruled out before Bale's late double clinched the points for Wales.

In fact, since manager Chris Coleman took over in January 2012, Bale has scored four of Wales' five goals - and he created the other for Sam Vokes.

The Tottenham winger sat out training on Tuesday but Wales are confident he will be fit to play.

And according to former Wales captain Kevin Ratcliffe, Bale was the only difference between the sides when they last met in October.

"If it wasn't for Gareth Bale we wouldn't have won," said Ratcliffe.

"The big problem though is, if Gareth Bale's not scoring, who is?

"We need other players now stepping up to the plate."