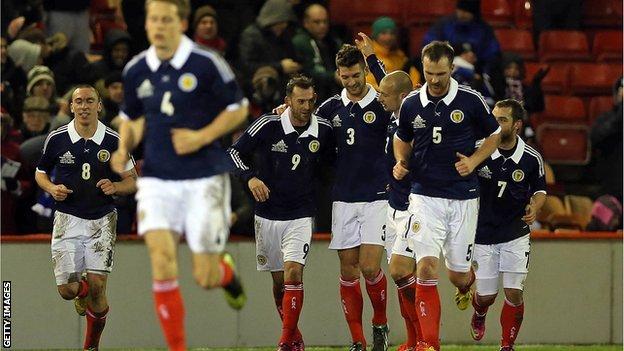 Speaking ahead of Friday's World Cup qualifier, Thomas labelled the Scotland side "the worst they have ever had".

"In all fairness, Mickey didn't see all of the teams, did he?"

Scotland, bottom of Group A, host the Welsh at Hampden on Friday in a World Cup qualifier,

"This Scotland team is the worst they have ever had," Thomas told BBC Radio Scotland's Sportsound.

"Wales should go there and get a victory. We played against the likes of Kenny Dalglish, Graeme Souness and Alan Hansen, people like that. They were a great team. They haven't got a top player."

Dalglish, Souness and Hansen were key players in the successful Liverpool sides that played during Thomas's career which took in spells at Manchester United and Everton, among others.

Thomas, 58, feels Wales are capable of beating Gordon Strachan's side with or without star man Gareth Bale.

"I played the game a long time," he said. "I came out with an honest statement and I think the audience listening tonight, the majority, will agree with what I said.

"It's only Strachan's second game in charge. I know him well but I think he's got a monstrous job on his hands and I tell you what, he doesn't have any players there good enough to get results against better teams.

"They might beat Wales on Friday but they are not good enough. They are going to struggle in any competition until they get the players through the system.

"I hope it's a great game on Friday. If Scotland win, I won't hear the last of it!"

However, Southall said: "I don't think it's the worst Scotland squad and you sometimes judge them on who your manager is and what style of play you've got. I think they're all good players and I don't have a problem with the Scotland players.

"Your development is better than Wales's so, sorry Mickey."

Scotland have played Wales, who are second bottom of the group, four times in the past nine years.

Robert Earnshaw scored a hat-trick as the hosts hammered Berti Vogts' Scots 4-0 in 2004 at the Millennium Stadium.

Five years later in Cardiff there was a 3-0 win for the Welsh as John Toshack's side inflicted a defeat that led to the sacking of Scotland boss George Burley.

Scotland lie 66th in the Fifa world rankings, five places above Chris Coleman's side, but they had fallen as low as 88th in March 2005 before Walter Smith improved the team's fortunes.