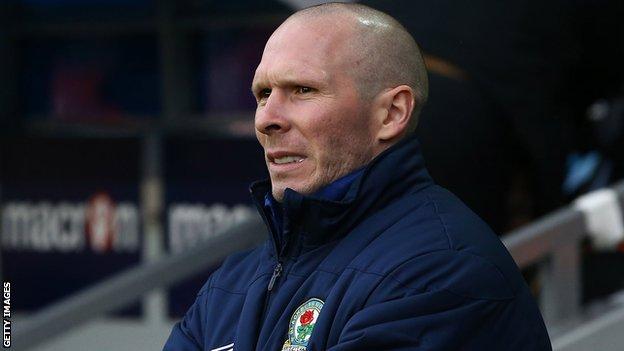 It says everything about Blackburn's current predicament that Michael Appleton was sacked by a man he had never met and without the knowledge of the club's managing director, Derek Shaw.

During his 67 days at Ewood Park, Appleton did not exchange a single word with global advisor Shebby Singh. In the end he was sacked by letter - an abrupt and unexplained end to a turbulent and troubled tenure.

Sunday's 1-1 draw with Burnley had proved the final straw. Blackburn had come within minutes of losing to their bitter rivals for the first time in 34 years, leaving the club just four points above the relegation zone - the owners had seen enough.

One phone call was all it took and Singh, having been pushed to the periphery since the turn of the year, was tasked with delivering the news.

The players had no inkling of what was to come as they arrived at the club's Brockhall training complex on Tuesday, nor did Appleton's assistants, who were also dismissed.

The owners asked that Gary Bowyer, the reserve team coach, take charge until the end of the season having performed so admirably when

The news of Appleton's demise was met by widespread disbelief. "Madness," was how former Blackburn and Real Madrid defender Michel Salgado described it. "When you ask me to tell the truth I don't even know it, I don't know who is making decisions," he wrote on Twitter. Former Blackburn striker Jason Roberts added: "I've never been more concerned for the club."

And yet if recent history tells us anything it is that nothing that has happened at Ewood Park this season should come as a surprise. Steve Kean was given eight games at the start of the season, Berg was Blackburn manager for 10, Appleton got 15. The problem is bigger than any manager.

Stability had become a buzzword in the early days of Appleton's tenure and he often spoke of being given the chance to "build a club." He was hard-working, disciplined, pragmatic, old-school.

Venky's have never been more unpopular, the value of their asset is plummeting rapidly and the prospect of a second successive relegation looms large

But at boardroom level, Blackburn is a club tearing itself apart. Singh and Shaw have not spoken since the turn of the year, avoiding each other on match days and watching from different boxes.

On taking the job, Appleton had sought assurances from the owners about these issues. He was told that Shaw, who recommended him, negotiated the deal and ultimately appointed him, was to take charge of the day-to-day running of the club, with Singh, who oversaw the unsuccessful appointment of Berg, pushed to the sidelines.

It prompted Appleton to say recently, "I'm not sure what Shebby is doing at the moment but, if he's global advising, he's certainly not advising me."

Initially, Shaw's increased influence allowed Appleton to concentrate on matters on the pitch. The club won four of his first seven games to close to within six points of the play-off places. But the FA Cup victory over Arsenal was to prove the high-water mark and Appleton's last win in charge.

The former Blackpool boss soon found himself grappling with more than just matters on the field. He attempted to build bridges with the board, repair the morale of a squad scarred by relegation and the methods of one manager after another. It was a job anyone would have struggled with.

The spotlight, once again, turns back to Venky's, Blackburn's Indian owners. "I don't know if anyone would want the job," Simon Garner, the club's all-time leading scorer, told BBC Sport.

"Three managers in a season - it looks like you lose a few games and you're sacked. Venky's don't seem to know how to handle a manager and the fans. It is a total mess. I can't believe it."

Anuradha Desai remains the ultimate decision-maker in Pune and those close to her insist the family remain committed to Blackburn. But Venky's have never been more unpopular, the value of their asset is plummeting rapidly and the prospect of a second successive relegation looms large.

At the end of last season, Kean was called to a meeting in India with Singh and tasked with immediate promotion back to the Premier League. They sanctioned previously unseen sums of money for new players, gambled on a return to the top-flight and the status and riches it brings.

And yet, some nine months on and their football club is stuck in reverse. The power struggle rumbles on, different factions, pulling in different directions, neither sure of their position, neither sure who the owners trust or where the club is going. Appleton was a pawn, collateral damage.

Singh, having been on a break in his homeland of Malaysia for the past fortnight, would appear to be back in favour, casting doubt over the position of Shaw and operations director Paul Agnew.

The only consolation for Blackburn fans, is that in Bowyer they have appointed a manager in whom the players believe. But at a time when the focus should be on the field, the eyes of the footballing world have turned on the owners and the board once again for all the wrong reasons.