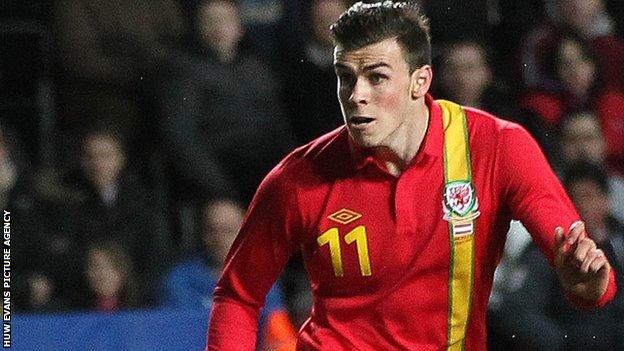 The Tottenham Hotspur star took part in a light training session in Glasgow on Thursday night.

And as kick-off approached at Hampden Park, Coleman confirmed Bale's recovery from an ankle injury and virus that had stopped him training this week.

"He had a bit of a virus Tuesday [and] Wednesday," said Coleman.

"So we couldn't do any sessions with him. He just needed rest really.

"He took a later flight [to Scotland] because we wanted to separate him from the lads for obvious reasons."

On the eve of the game Coleman insisted that he would not play Bale unless he was completely fit.

"I am not the type of manager to play mind games. I would rather get on with it," said Coleman.

"It is what it is. I don't have an elaborate plan up my sleeve; he [either] is not going to play or he definitely is.

"It is pointless bringing him up if I didn't think he had a very good chance."

Though 23-year-old Bale is fit, Sunderland midfielder David Vaughan (groin) has been ruled out.

However, Vaughan could be fit to face Croatia in Swansea on Tuesday.

Having played 90 minutes for Tottenham on Sunday, Bale missed the first two training sessions with Wales to follow his own recovery programme.

But he was again missing on Wednesday as the squad, including the others who played for their clubs on Sunday, continued preparations for the trip to Glasgow.

Bale needed treatment on his right ankle during the first half of Spurs' match with Fulham on Sunday, but was able to finish the match as his side lost 1-0 at home.

Wales will be looking to build on their recent friendly win over Austria.

Wales secured their first win of the qualifying campaign in October as Bale scored twice, including a stunning winner a minute from time, to beat Scotland.

In their last outing, Bale was again the dominant force as he scored one and created the second for Sam Vokes in a 2-1 win over Austria in Swansea.

Sandwiched between those games was a 2-0 away defeat by Croatia.

Striker Jermaine Easter, on loan at Millwall from Crystal Palace, and Bristol City defender Lewin Nyatanga were drafted in as cover.