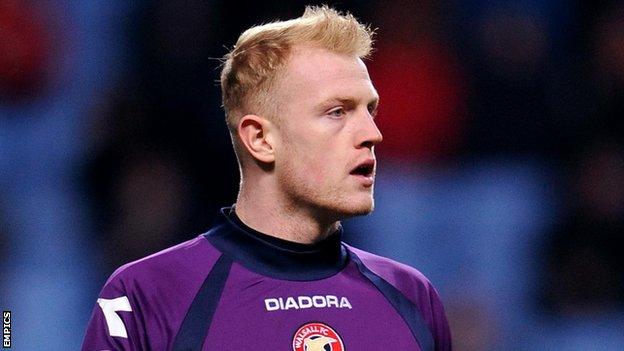 Walsall have been forced to line up a new loan keeper to replace Aaron McCarey, following his sudden recall by Black Country neighbours Wolves.

The freak injury suffered by Wolves' Carl Ikeme means an abrupt end to the Republic of Ireland U21 international's second loan this season at Bescot.

"It's one of those things that happens in football," said boss Dean Smith.

But Saddlers manager Smith admits that the decision to let Grof leave was made having already known that they were were likely to lose McCarey too.

"We found out on Saturday evening that it was likely that Aaron would be recalled," added Smith, "so we have spent the past 48 hours in discussions with various clubs.

"And we will complete the signing of a new on-loan goalkeeper on Wednesday."

Whoever comes in will be the seventh keeper included by the Saddlers in their matchday squad this season.

After starting the season with Grof, they brought in Karl Darlow from Nottingham Forest for the first of two loan spells, which ended when he returned to become first-choice at the City Ground in January.

McCarey has also spent two spells on loan at Bescot, either side of Ian McLoughlin coming in for a month from MK Dons.

Veteran Walsall legend Jimmy Walker, released by the club in early February, and trainee Richard Jones have also both been on the bench.