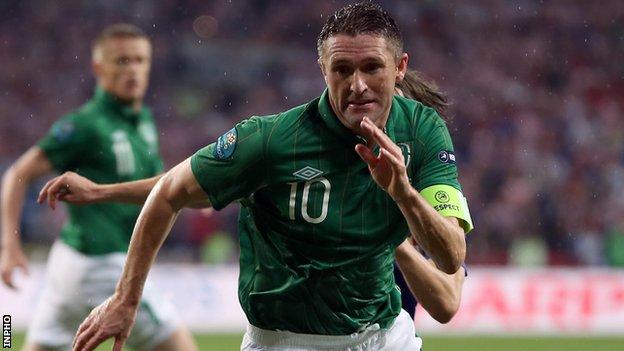 The Republic of Ireland's skipper and record scorer Robbie Keane says he has no intention of following Michael Owen into retirement just yet.

On the day 32-year-old Keane was looking forward to a World Cup double-header.

The Irish take on Sweden in a qualifier in Stockholm on Friday night and play Austria in Dublin four days later.

"I will still be playing for certainly a good few years," Keane said.

"I have seen Michael Owen retiring from football. We came on the scene around the same time.

"I dread the day I have to finish playing because it's my life, this is what I love doing. I wake up every morning and look forward to going to training and playing games.

"As long as I am healthy and fit, I can easily carry on for another four or five years, easily."

Keane, on 122 Ireland caps, will move to within one of record holder Shay Given if he plays against Sweden and Austria.

Having spent the last decade and more putting international defenders to the sword, the former Tottenham and Liverpool striker is well placed to assess the threat posed by Sweden frontman Zlatan Ibrahimovic.

Indeed, he has received inside information from the Swede's Paris St Germain team-mate David Beckham.

"He is certainly one of the best strikers at the moment in the world, certainly on current form. He's banging the goals in.

"I was speaking to Becks and he was saying how good he is in training. Since he has been there, I think he has scored in every game.

"He is certainly one to watch, but I would not focus too much on one player because they have other quality in the team.

"But it is one of those. We have to concentrate and look after what we do rather than worry too much about Sweden."