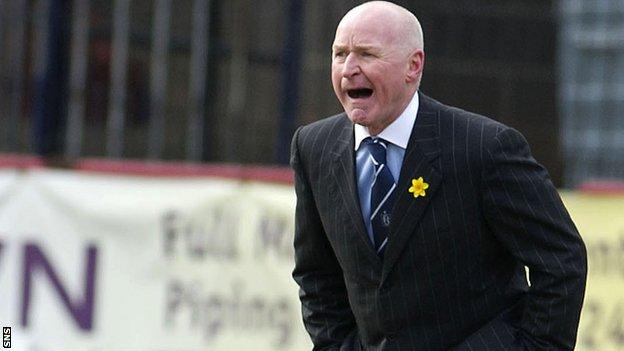 The two countries meet in a Group A World Cup qualifier.

Cancel him out and the Welsh team are average

"Well, do you know what you do; with the pace that he's got and the close control - he can't run without legs," Brown told BBC Radio Scotland.

"I'm sure it'll be passed around the squad. Get close to him and don't give him time and space."

Scotland lost October's away fixture with Wales in Cardiff and are now bottom of the group on two points.

"One player in the Wales team won the game that night; cancel him out and the Welsh team are average," Brown said.

"I watched the game down there and the difference was Gareth Bale, when you give him time and space to run with the ball and strike it with his strong foot from 30 yards.

"Scott Brown was taken off, Charlie Adam came on and he never did a job on him.

"Your midfield, you get them tight, make sure your defence is compact and you make sure you're losing all the space for him.

"Gordon Strachan will know what he's doing. If he can nullify him I think the Welsh team are average."

On Sunday, the Dark Blues drew 1-1 with rivals Dundee United in the Scottish Premier League and opposition winger Gary Mackay-Steven was one of the main threats.

"I said get close to him [Mackay-Steven], get challenges in, put him off, don't give him time and space because he was the difference in the cup game.

"Not hit him hard; get close, get challenges in. People are forgetting it's a contact sport."