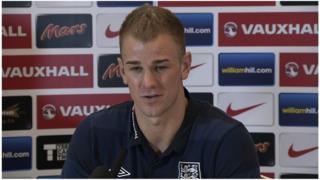 England goalkeeper Joe Hart says that he will "come out fighting" after admitting his form this season for club and country has "not been brilliant".

Speaking ahead of a World Cup qualifying double-header against San Marino and Montenegro, Hart believes the match against Montenegro next Tuesday is as big as a World Cup group match.

Meanwhile, midfielder Scott Parker expects a tough defensive performance from San Marino on Friday - and Hart hopes not to be the one to concede against a side who have scored just two goals in their last 25 internationals.