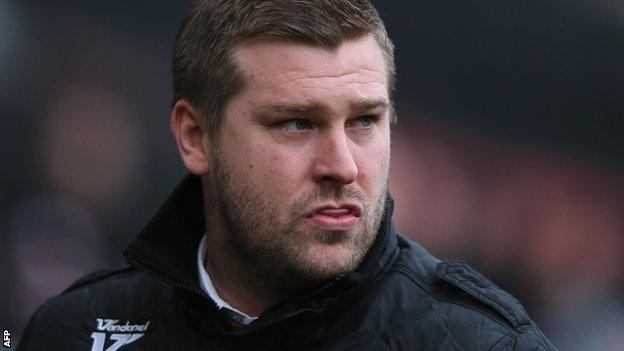 MK Dons boss Karl Robinson has pledged to be at the League One club next season, but has warned his players that some of them might not be.

The Dons manager was furious after which left their play-off hopes in tatters.

"I've told them that some of them won't be playing for the football club next season. I'll be here.

"But performances like that are not acceptable," the 32-year-old told BBC Three Counties Radio.

MK are desperate to win promotion to the Championship, having reached the play-offs in the last two seasons, and chairman Pete Winkelman admitted recently he was this term.

But Robinson, who has been linked with moves to and in the past, is on course for his worst finish in a full League One campaign since being appointed in May 2010.

"We've got six games we need to win out of eight. There's still a target to achieve," the Liverpudlian said of his side, who are 12th in the table and nine points off the play-offs.

"But if they do start losing football games, I'll start making changes very quickly. I don't know - I've not got many to bring in.

"I've got some good young players at this club and I'll play them. It might mean more to some of them."

Robinson had stern words for defender Antony Kay, who received his third red card of the campaign at Crewe after picking up two bookings.

"The sending off was an embarrassment for Antony Kay," he said. "I've stuck up for him in the past, but they were two blatant yellow cards.

"He knows how short I am of numbers and he's let me down, his teammates down and the fans who have travelled down."