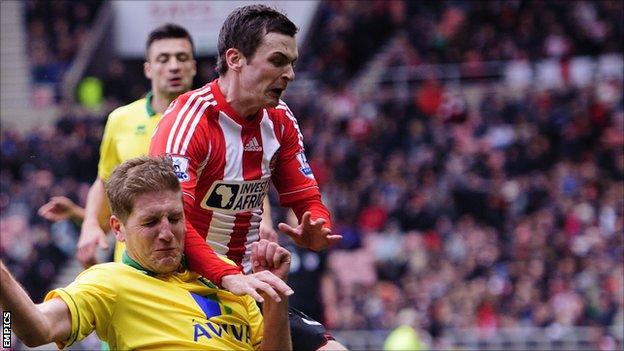 Sunderland winger Adam Johnson has said criticism is to be expected from fans for a run of seven Premier League games without a victory.

The Black Cats were held to a 1-1 draw by Norwich on Sunday, despite playing against 10 men for over an hour after Mark Bunn's dismissal for handball.

"You always get that, being judged [by fans and pundits] is a part of football," Johnson told BBC Newcastle.

Johnson added: "I never read papers when I was younger, it doesn't bother me anymore what people say about me, I just want to get on with the game and do as well as I can.

"As a team and as a club we've got to stick together and just get through this bad time, all teams go through it."

The 25-year-old arrived on Wearside in August from Premier League champions Manchester City, returning to the city of his birth for an undisclosed fee.

Having been part of Roberto Mancini's success at Eastlands, the Black Cats faithful had high hopes for the former Middlesbrough winger, although the team's overall mixed form has made it difficult to impress.

"When you're winning it goes well, no-one has anything to moan about," Johnson added.

"When things aren't going well, people get down, the team and fans and the sooner we get a couple of good results the better. We've just got to keep fighting."

Next up for the Black Cats after the international break is the visit of league leaders Manchester United, a tough test in the bid to add to just two wins in the calendar year, although Johnson believes the lack of expectation could be a positive factor.

"The last three games everyone expected us to get a result, you get points in games where teams don't expect it."

"Maybe the lads go out without expectancy and can play their own game, so when we surprise them it's good.

"There's nothing better than playing a team that could win the league this season and show them what we can do.

"A good performance against them and everything is good again."