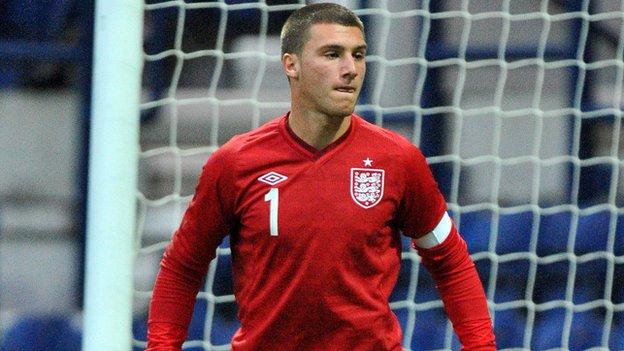 Walsall have signed teenage Manchester United reserve goalkeeper Sam Johnstone on loan for the rest of the season.

Johnstone is set for an immediate debut at Hartlepool on Saturday after being brought in to succeed Aaron McCarey, who was recalled from loan on Monday by Black Country neighbours Wolves.

"It was unfortunate that Aaron was recalled," said boss Dean Smith.

"But he will be replaced by a very able lad in Sam Johnstone. I know that United have high aspirations for him."

The England Under-19 international, who celebrates his 20th birthday on Monday, will be making his third loan move from Old Trafford, having spent spells last season at two other League One clubs - Oldham Athletic and Scunthorpe United.

Johnstone will be the seventh keeper the Saddlers have included in their matchday squad this season.

After starting the season with David Grof, they brought in Karl Darlow from Nottingham Forest for the first of two loan spells, which ended when he returned to become first-choice at the City Ground in January.

McCarey has also spent two spells on loan at Bescot, either side of Ian McLoughlin coming in for a month from MK Dons.

Veteran Walsall legend Jimmy Walker, released by the club in early February, and trainee Richard Jones have also both been on the bench.

But in the wake of the freak dressing room injury suffered by Wolves' Carl Ikeme on Saturday, which meant an abrupt end to Republic of Ireland Under-21 international McCarey's second loan this season at Bescot, Smith already had Johnstone lined up.

"I know a lot about the lad and have had some very positive reports on him," said Smith.

"He has already had a couple of previous loan spells at this level, so he knows what it's all about.

"Having watched him in action recently, I'm delighted to be able to bring him on board until the end of the season."

Walsall will be defending a nine-match unbeaten run when they travel to relegation-threatened Hartlepool on Saturday (23 March, 15:00 GMT).