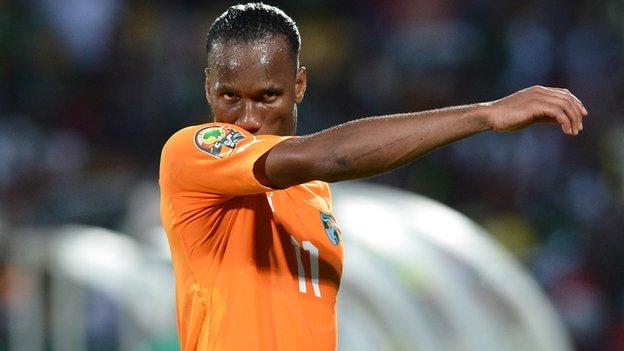 Didier Drogba has been challenged by Ivory Coast coach Sabri Lamouchi to return to his best form and force his way back into the national team.

The 35-year-old striker has been left out of Lamouchi's squad to face Gambia in a World Cup qualifier this weekend.

"Drogba is a huge player with a bigger status than any other player but he has had a difficult last eight months and he now needs to work," Lamouchi said.

"He needs to get back to his competitive standards."

Drogba was also dropped during this year's Africa Cup of Nations in South Africa, which the Ivorians started as favourites but suffered a surprise quarter-final exit.

Lamouchi feels the Elephants skipper has been unsettled by recent transfers from Chelsea to China's Shanghai Shenhua and then to Turkish club Galatasaray.

And he is keen for Drogba to get some game time to regain his fitness before he pulls on the Ivorian jersey again.

"He has had three different clubs in the last eight months and his time in China cost him a lot of fitness. It means he was not the Didier we know at the last Nations Cup," said Lamouchi.

"But Didier is the captain of the Elephant. I'm counting on him in the World Cup qualifiers. I have no doubt that we will see the return of Didier Drogba at the highest level. Any team would need players of his great calibre."

Drogba was one of six players from the Nations Cup squad dropped for the World Cup qualifier in which the Ivorians are expected to increase their lead in Group C. They have four points from two matches.

The forward has inspired the Ivorian national side to become the top-ranked team in Africa with 57 goals in 94 appearances.