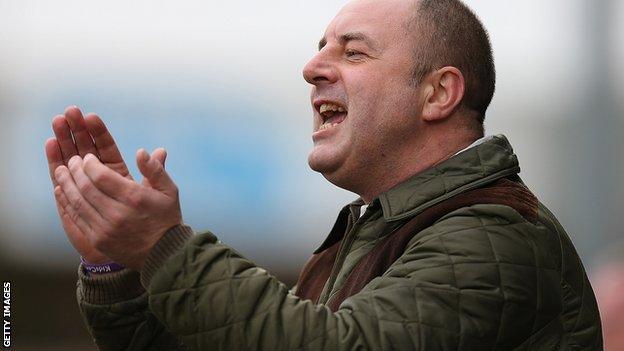 Keith Hill has admitted his second spell as Rochdale manager has proved to be tougher than he initially expected.

with Dale 14th in League Two.

Ex-Barnsley boss Hill has won only twice since replacing John Coleman, with the club slipping three places to within six points of the drop zone.

"I wasn't coming here looking for a cakewalk but I was certainly expecting it to be a lot easier than it has been," he told BBC Radio Manchester.

"There's a need to get the points, no matter how. We need to be brave enough to get them.

"It's not going to happen overnight. There's no quick fix.

"I've been here two months and I can't explain what I've found out. It saddens me a little bit if I'm being honest, but it makes my job really hard this season.

"I feel as though it's coming along but we've got to get there quickly, or we could be facing the trap door."

Hill, who signed a deal until the end of the season, has stated he and remain with the club he guided into League One in 2010.

Meanwhile, Rochdale defender Rhys Bennett has been ruled out for the remainder of the campaign with a knee injury.