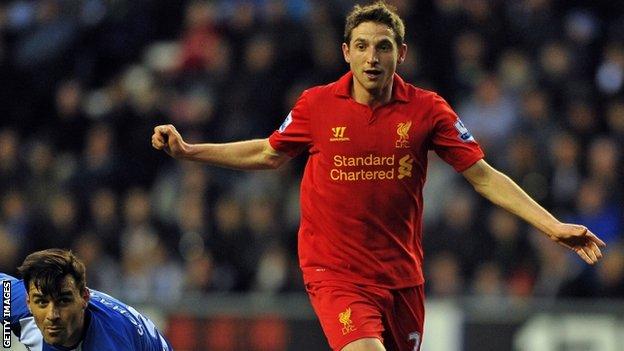 Liverpool midfielder Joe Allen will miss the rest of the season after it was decided he should undergo surgery on his left shoulder on Thursday.

The problem has had a negative effect on Allen's form of late and he was forced off at half-time during Liverpool's 3-1 defeat by Southampton.

Liverpool had hoped the 23-year-old would be able to play through the pain but that has proved impossible.

Allen is expected to be available for Liverpool's summer tour of Asia.

The former Swansea player had already withdrawn from the Wales squad for their forthcoming World Cup qualifying matches against Scotland and Croatia.

The problem first flared up last autumn, but Allen passed up the opportunity to have surgery, preferring to work hard at Liverpool after his move from Swansea. But with the injury becoming increasingly restrictive, the decision has been made to have the operation.

"It is something that needs sorting out," Allen said recently.

"I had an operation a few years ago and unfortunately it is a recurrence. It has slowly deteriorated to the point where an operation is the only thing that can solve it."