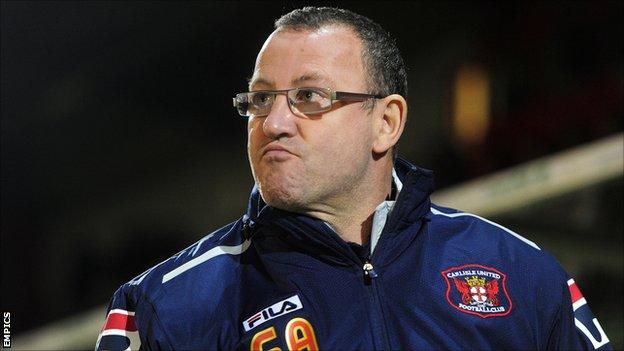 Carlisle boss Greg Abbott has spoken to the board about his future but says no decision will be made before the club's League One status is secured.

United are seven points away from the drop zone with eight games to play and have won only one of their last eight.

"It's not about individuals, it's about the club knowing where they are next season and that's it. The club must come first."

Abbott's Carlisle side have reached Wembley twice, winning the Johnstone's Paint Trophy at the second attempt, after a thrashing by Southampton the previous season. They missed out on the play-offs last season after a promising campaign but have failed to replicate that form this term.

Several first-team players are also out of contract this summer, including striker Lee Miller.

"We need to get these points first then we can dust down all these issues that are out there at the moment," said Abbott.

"We'll know then where the club, the team and the squad are going to be next season. Then we can start breaking it down to individuals, players and staff."