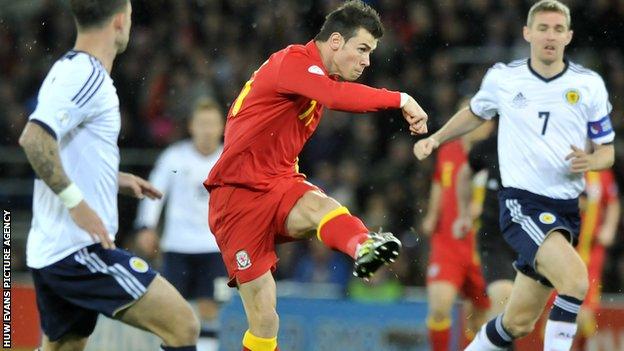 Wales manager Chris Coleman is confident Gareth Bale will be protected from any rough tactics in Friday's World Cup qualifier with Scotland.

Former Rangers defender John Brown has said Scotland need to "cancel out" Bale and that the Wales flyer "can't run without legs".

"If that's what's going to come, I'm quite sure the referee will be doing a good job," said Coleman.

"If we have to play against 10 men or nine men, that's not our problem."

Bale proved to be the difference between the two sides when they met in Cardiff in October, scoring twice in a comeback win that has given Wales their only points of the Group A campaign so far.

Much of the pre-match build-up has focused on how Scotland can deal with Bale's threat at Hampden Park.

But Coleman dismissed suggestions that the Scots, playing their first competitive game under new manager Gordon Strachan, will be able to get away with overly aggressive challenges.

"Twenty five years ago maybe you could go about stopping someone like Gareth Bale in a different way," said former centre-back Coleman.

"You can't do that now because the game's evolved and moved on. That's yesteryear thinking.

"One thing is trying to go into a heavy challenge with a player to stop his game, it's another thing to deliberately going out to harm someone. Now, there is no room for that."

Bale has been recovering from an ankle injury picked up in Tottenham's defeat by Fulham on Sunday. A slight illness has also contributed to him not training with the rest of the squad at the beginning of the week.

He had a similarly interrupted build-up to the home game with Scotland and Wales expect the 23-year-old to play in Glasgow.

Qualification for the finals in Brazil appears to be a forlorn hope for both sides. Scotland are bottom of the group without a win on two points, while Wales sit a place above with a point more.

Belgium and Croatia, who visit Wales on Tuesday, lead the way on 10 points.

"We're expecting a feisty affair and I'm sure they will be as well. I hope both teams don't disappoint," added Coleman.