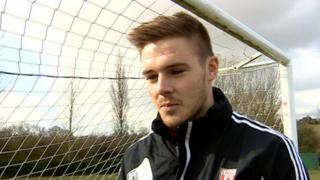 Goalkeeper Jack Butland officially joins Premier League Stoke City in the summer for £3.5m from Birmingham City, but the 20-year-old is already getting used to life in the Potteries.

Butland spends at least one day a week training with Stoke as he prepares for the next step of his meteoric rise.

And he tells BBC Late Kick Off Midlands reporter Laura May McMullan that he not only wants to become number one at the Britannia Stadium, but aims to dislodge Joe Hart from the England team.

The current England under-21 goalkeeper made his full debut against Italy in August, but has recently seen West Bromwich Albion's Ben Foster return to Roy Hodgson's England set-up to provide more competition.