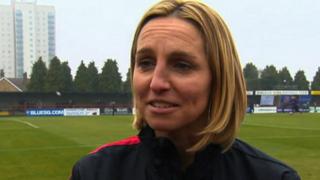 The right time to retire - White

Former Arsenal and England captain Faye White says she is "emotional" about her retirement from football, but that "it is the right time".

White, 35, who won 90 caps, quit international football in April last year after announcing she was expecting her first child, and the former defender says her "body can't handle as much" after a knee problem prevented her from returning to club action.

In a career which saw her win 29 major trophies, White says that the quadruple winning season of 2007 was a highlight.