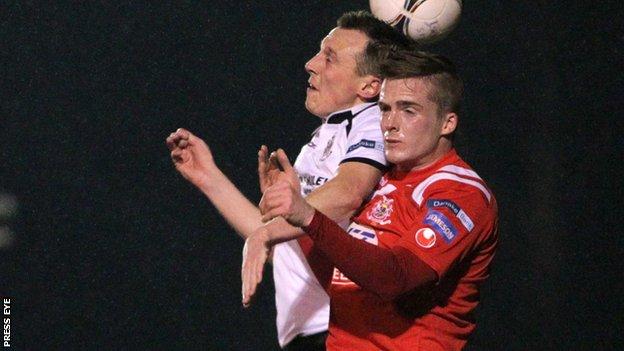 Tim McCann has promised a much better Lisburn Distillery performance when they face Portadown for the second time in four days on Saturday.

The Whites crashed 5-0 to the Ports on Wednesday to remain eight points adrift at the bottom of the Premiership table.

"We were shocking from start to finish," admitted McCann.

"I have praised the players in recent weeks but tonight something was missing. Come Saturday, you will not get a repeat of that performance."

Portadown's five-goal tally keeps them in with an outside chance of snatching a top six place before the end-of-season split.

With one match to go, Ronnie McFall's are three points behind Ballinamallard who have a better goal difference by seven.

Ballinamallard are at home to Linfield on Saturday.

At the foot of the table, McCann admits Distillery need an immediate upturn in fortune.

"Any more performances like Wednesday night's will make live very difficult," he added.

"We need to start picking up points quickly."

Distillery's position could be greatly improved if Donegal Celtic are found to have fielded an ineligible player in last weekend's bottom two clash.

If the decision goes against DC, they would lose three points which would be awarded to Distillery.

"We are not talking about it in the changing rooms, but if we get that little bit of luck it is up to us to grab it with both hands," said McCann.