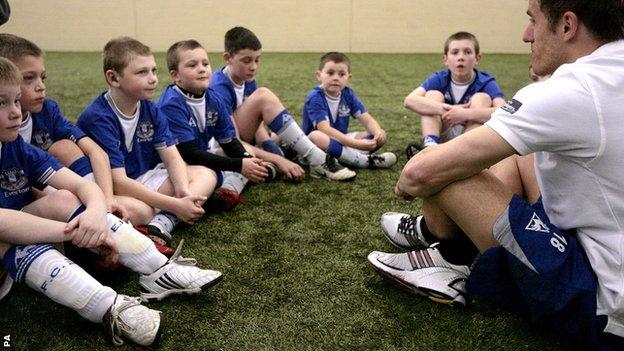 Football may have occupied an awkward place at the London Olympics.

But, eight months on from the start of the Games, the national sport appears to be playing an increasingly important role in helping deliver the legacy commitments on which the event was based, both in terms of participation and social impact.

On Thursday, the Premier League launched its annual Creating Chances 2012 report, a summary of its corporate social responsibility (CSR) work.

The 64-page document features an introduction from none other than Lord Coe, architect of the Games, and the government's legacy adviser. "The Premier League is to be applauded for ensuring that thousands of young people will get their opportunity to participate in sport," he says.

Coe goes on to praise the variety of community work that Creating Chances projects cover at home and abroad, from 'Kickz', which in conjunction with the police tackles crime in tough inner-city estates, to 'Premier Skills' which, with the British Council, provides coaching abroad, and Premier League for Sport, which gets kids into Olympic sports.

It is interesting to note that football is now being asked to provide services traditionally seen as the responsibility of local government.

For instance, Liverpool FC and Sunderland FC now act as lead agencies in their cities for men's health and family learning. Clubs are also involved with programmes to improve child literacy and enterprise.

And then there's education. Last week the government announced funding for primary schools that would enable them to hire academy coaches from Premier League clubs to improve the PE and sport lessons they offer pupils.

It's easy to see why some may feel uncomfortable with an organisation like the Premier League occupying this territory.

And yet, this public-private partnership has obvious advantages. At a time when local authorities are slashing budgets, especially for discretionary provision like youth services, and sports and leisure facilities, the Premier League is going some way to filling the vacuum.

At a time of high youth unemployment, and with the London riots still fresh in the memory, much of their community work seems essential.

Premier League clubs have a resonance and reach that is invaluable. It's easy to see how pupils are much more likely to be inspired and engaged by a PE lesson taken by a coach with a Premier League club badge on their tracksuit, than one without.

It's not all down to simple altruism of course. The Premier League recognises that all this work in the community helps to spread the gospel, and ultimately to attract the next generation of customers and supporters.

And there's never been a better time for the league to highlight the work its clubs are doing to put something back. Chief executive Richard Scudamore will soon announce that the Premier League has secured a blockbuster record £5.5bn broadcasting deal.

So is £45m enough of a contribution given the riches that the clubs, owners, players and agents will continue to enjoy?

Ultimately, it all depends on your perspective.

Some say it is more than enough. After all, it represents about 3.7% of Premier League turnover, more than the 1% that most blue-chip companies give to CSR. And some argue the league's role shouldn't be as a funder of charity anyway. Its role, they say, is to be as competitive as possible. To afford the best players. To balance the books in this era of financial fair play. Why should the clubs be expected to compensate for the fact that here, unlike in parts of Europe, council spending on sports facilities isn't mandatory?

Others disagree. They point to the £6m a year the Premier League now gives to the Football Foundation specifically to be spent on the nation's dilapidated council-run grassroots facilities (down from £20m a few seasons ago), and note that it amounts to what Wayne Rooney earns in six months.

At the time of writing, an e-petition calling for the Premier League to donate as much as 7.5% of its TV revenue to grassroots facilities (rather than 0.4% currently) had reached 5,000 signatories. It needs 100,000 by next year to be debated in Parliament.

But regardless of the success or otherwise of that campaign, for as long as it continues to pull in record broadcasting deals, Scudamore's organisation knows it will be forced to defend its status as a good corporate citizen, hence today's report.

However you feel about the amount the league contributes, it's worth considering the bigger picture.

It was revealing this week to listen to a debate hosted by UK Youth, an umbrella group for thousands of youth clubs up and down the country. These organisations operate in some of the UK's most deprived inner-city communities, providing essential support outside of family, school and work for young people who most need help. A whole host of leading sports development bodies were represented around the table.

"The scale and reach of what is being achieved is undeniable. No other sporting body in this country gets close, and certainly none of the other major European leagues."

It's hard to think of organisations better placed to deliver and to gauge whether the Games have genuinely improved the lives of young people through sport.

The message coming out of the discussion was clear: that corporate sponsorship of sports development programmes has all but dried up as executives' attentions turn towards Rio; that many sports charities are now in pure survival mode as they are forced to chase ever fewer grants, and come up with ever more complicated ways of justifying their work; and that local authority spending on youth services and sports provision is being slashed, as shown by the recent closure of Don Valley stadium in Sheffield.

The consensus was that the enthusiasm and energy created by the Games was in grave danger of being wasted, despite the government's recent £493m investment into community sport through Sport England.

Charlotte Hill, chief executive of UK Youth, says: "As an organisation that has worked with young people around the country for decades we know the power that sport has to change young lives and we applaud the Premier League for the work it does.

"But surely it can do even more. The London Olympics has swiftly become just a memory and the legacy promises it was founded on are in serious danger of being broken.

"There needs to be more joined-up thinking around grassroots sporting activity. The youth club network could help with this. We'd like to see a bigger chunk of the revenue that major commercial deals bring in diverted to the people and places where it is needed the most.

"We would relish the chance to work with the football industry to create a way of deriving an even greater community benefit from the huge sums that our national sport generates."

For years, those behind the scenes at the Premier League have wanted the clubs to be more involved in their communities, to see beyond the perimeter of their respective stadiums, to do their bit.

They have seen the value in such a move and recognised the role the clubs could play. The web of projects today being highlighted do fantastic, essential, effective work. A government desperately trying to balance the books has been only too happy to take the Premier League up on its offer.

But the more the Premier League takes on, and the more money it makes, the more it will be asked to make a difference to society at large.